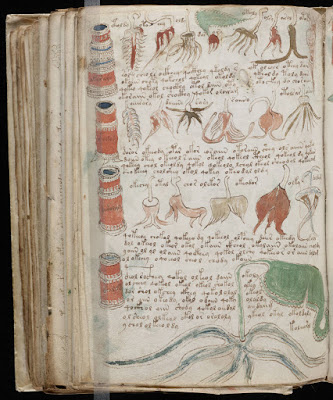 The Book of Soyga, also titled Aldaraia, is a 16th-century Latin treatise on magic, one copy of which is known to have been possessed by the Elizabethan scholar John Dee. After Dee's death, the book was thought to be lost until 1994 when two manuscripts were located in the British Library (Sloane MS. 8) and the Bodleian Library (Bodley MS. 908), under the title Aldaraia sive Soyga vocor, by Dee scholar Deborah Harkness. The Sloane 8 version is also described as Tractatus Astrologico Magicus, though both versions differ only slightly. 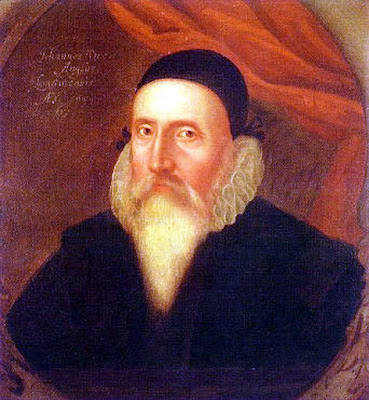 
Jim Reeds notes that the Bodley 908 MS consists of 197 leaves including Liber Aldaraia (95 leaves), Liber Radiorum (65 leaves), and Liber decimus septimus (2 leaves), as well as a number of shorter and unnamed works totaling approximately ten leaves. The final 18 leaves of the MS contain 36 tables of letters. The Sloane 8 MS consists of 147 leaves, mostly identical to the Bodley MS, with the exception that the tables of letters appear on 36 leaves, and the Liber Radiorum is presented in a two leaf summarized version.

Amongst the incantations and instructions on magic, astrology, demonology, lists of conjunctions, lunar mansions, and names and genealogies of angels, the book contains 36 large squares of letters which Dee was unable to decipher. Otherwise unknown medieval magical treatises are cited, including works known as liber E, liber Os, liber dignus, liber Sipal, and liber Munob.

Jim Reeds, in his short work John Dee and the Magic Tables in the Book of Soyga, notes a proclivity to record words backwards in the MS, citing as examples Lapis reversed as Sipal, Bonum reversed as Munob, and the title of the MS, Soyga, as Agyos, literis transvectis, revealing a practice which sought to obscure some of the works cited. 'Soyga' is ‘Agios’ (Greek for "Holy") spelled backwards.

Reeds writes:
The Book of Soyga's preoccupation with letters, alphabet arithmetic, Hebrew-like backwards writing, and so on, is of course characteristic of the new Cabalistic magic which became popular in the sixteenth century, exemplified by the great compilation of Agrippa of Nettesheim (1486-1535), and borrowing authority both from the Renaissance humanist interest in the Kabbala expressed by such figures as Pico and Reuchlin and from the supposed Biblical antiquity of the Kabbalah."

Of the square tables that obsessed Dee, Reeds continued, "Although... not themselves a characteristic feature of the traditional Kabbalah, they had by Agrippa's time become an integral part of the Christian magical Cabala.

In 1556, Dee proposed the founding of a national English library to Queen Mary, but his plan was not implemented. In consequence, Dee amassed the largest library in England at the time using his personal funds, consisting of at least 3,000 printed volumes and a large number of manuscripts. The library was pilfered during Dee's six-year trip to the European Continent between 1583 and 1589, and Dee was forced to sell many more volumes upon his return due to penury. After his death in 1608 or 1609, the still-considerable remnants of the vaunted library were ransacked until nothing remained.

During Dee's long trip to the Continent, he sought to supernaturally contact angels through the services of a scryer, Edward Kelley. On the subject of the Book of Soyga, Dee claimed to have questioned the angel Uriel about the significance of the book and asked for guidance. The reply that Dee received was that the book had been revealed to Adam in Paradise by angels, and could be interpreted by the archangel Michael.

After Harkness rediscovered the two copies of the book, Jim Reeds uncovered the mathematical formula used to construct the tables (starting with the seed word given for each table), and identified errors of various types made by the manuscripts' scribes. He showed that a subset of the errors were common to the two copies, suggesting that they were derived from a common ancestor which contained that subset of errors (and thus was presumably itself a copy of another work).

Although Reeds deciphered the construction algorithm and the code words used in crafting the tables, the actual contents and significance of the tables remain mysterious. He writes, "The treatise in the Book of Soyga which discusses the tables, Liber Radiorum, has a series of paragraphs mentioning the code words for twenty-three of the tables, together with number sequences which stand in unknown relation to the words."

John Dee had been expecting a minor spirit from the great hierarchy of the heavens, and here he had before him an archangel, one who apparently had a direct line to Enoch and perhaps the Adamic language Enoch had recorded. His reaction was immediately to ask Uriel about the "Book of Soyga."

The Book of Soyga was particularly precious to Dee. His only mention of it before now was in a diary entry made earlier that year, where he reports having the volume fumigated to protect it from mildew.

In 1583, the book went missing from Dee's library, but he managed to recover it a decade later. Following Dee's death, it passed into the collection of the duke of Lauderdale, but then this slippery text went missing once more. It was finally rediscovered in 1994 by the Dee scholar Deborah Harkness, who found it in both the Bodleian and British Libraries, but cataloged under an alternative title mentioned by Dee, Aldaraia. Both copies are anonymous sixteenth-century manuscript versions of a (presumably) lost original. It seems likely that the British Library copy was the one owned by Dee, the very work that was now in his study and the focus of his intense curiosity.

The book is full of lists and tables. There are lists of spirit names, of astrological conjunctions, of spells and invocations-the very sort of cabalistic codes that had filled Trithemius's Steganographia.

Dee's first question to Uriel, communicated via Talbot, was an anxious inquiry about the status of this work. "Is my Book of Soyga of any excellency?" he asked.

"That book was revealed to Adam in paradise by the good Angels of God,” Uriel replied. A revelation, and not just to Adam. Dee must have now dared to think that this book was of divine importance--perhaps a copy of the Book of Enoch mentioned by the Ethiopian priest to Postel. Perhaps its tables and lists were a coded version of the very language Adam had been given by God.

“Will you give me any instructions, how I may read those tables of Soyga?" Dee asked Uriel.

"I can," Uriel replies, tantalizingly. "But only Michael can interpret that book.”

Dee was desperate, but had probably expected the reply, as it was Michael he had previously attempted to contact in this stone through Saul. "What may I, or must I do, to have the sight and presence of Michael, that blessed angel?" Dee asked. "Summon and invoke our presence with sincerity and humility," Uriel replied, with what to Dee must have been maddening serenity.

"Michael is the angel who lights your way. And these things are revealed in virtue and truth, not by force.”

At that point, the conversation was interrupted by Talbot reporting the appearance of a new vision in the stone, a triangular talisman engraved in gold. Worn on the chest, Uriel promised, this device would protect its bearer "at every place and time and occasion."

There, the session ended. Dee spent the afternoon musing on what he had experienced. It was evidently a kind of communion that was very different from any he had experienced with his previous skryers. There was something compelling, convincing about the spirit this Talbot had summoned that morning. At five o'clock in the afternoon, the two of them were in Dee's study again. After saying their prayers, Talbot managed to summon Uriel back to the stone. Dee pressed to know more about the Book of Soyga. "Peace," Uriel replied, "you must use Michael." "I know of no means or order to use in the invocating of Michael,” Dee replied.

Uriel was obligingly specific in reply. He and Talbot must recite certain psalms, which will deliver them before the "seat and Majesty of God." They did as instructed, and a "rich chair" appeared briefly in the stone. "There must be conjunction of minds in prayer, betwixt you two, to God continually," Uriel added. "It is the will of God that you should jointly have the knowledge of his angels together. You had attained unto the sight of Michael but for the imperfection of Saul. Be of good comfort." In other words, Dee's failure to discover the secret of Soyga in the past had been Saul's fault. If he now stuck with Talbot, all would be imminently revealed.
Posted by Mitch Williamson at Monday, June 08, 2015