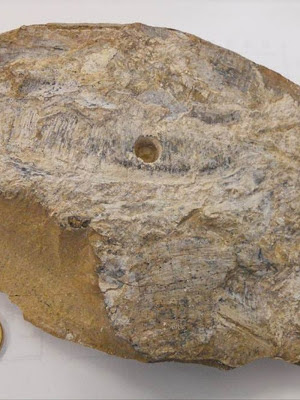 Analysis of a 380-million-year-old crab-like fossil from Western Australia has painted a gruesome picture of the events leading to one of Earth's major mass extinctions.

Climate change and a devastating meteorite have both been fingered as causes for the decimation of marine life during the late Devonian period.

But research published in a recent issue of the journal Geology suggests the extinction occurred as a result of a toxic ocean, devoid of oxygen.

"We think there was anoxia, where toxic levels of hydrogen sulfide are released into the zone where light penetrates into the ocean," says organic geochemist Professor Kliti Grice, of Curtin University.
"A modern analogue of the conditions that existed at this time is the Black Sea."

Grice and colleagues, including PhD student Ines Melendez, reached their conclusions after analysing a 380 million-year-old crab-like fossil from the Gogo Formation in Canning Basin, Western Australia.

They identified chemical remains of various biological molecules, known as biomarkers, that helped paint a picture of environmental conditions at the time.

The researchers found a derivative of cholesterol, confirming for the first time that the fossil was the remains of a crustacean.

And they found biomarkers of photosynthesising phytoplankton, which the crustacean would have fed on.

Grice and colleagues also found biomarkers of green sulfur bacteria, also called Chlorobi which would have photosynthesised using hydrogen sulfide instead of water.

She says Chlorobi made a special pigment that enabled them to capture light of longer wavelengths, making it possible from them to survive in the murky waters beneath the bloom of phytoplankton.
"The ocean became stratified with an oxygen layer and an anoxic layer, and where the Chlorobi lived, right at the point where hydrogen sulfide is abundant," says Grice.

Last but not least, the researchers found biomarkers of sulfate-reducing bacteria, which would have lived even deeper down in the ocean and survived by degrading organic matter using sulfate instead of oxygen. This would have been the original source of the hydrogen sulfide on which the Chloribi thrived.

Grice says the condition of the ocean was identical to that which occurred during a later mass extinction at the end of the Permian, the largest extinction event in the past 600 million years.
The crustacean may have sunk to its death at the bottom of the ocean, intoxicated by hydrogen sulphide, says Grice, where it was preserved for hundreds of millions of years.

The researchers say the 15-centimetre wide crustacean was exceptionally well preserved by a combination of processes.

Grice says the hydrogen sulphide chemically preserved the muscle tissue in the crustacean, as well as organic molecules from the green sulfur bacteria.

"The molecules and the fossil were all preserved by the same mechanism, and that has never been reported in such detail," says Grice.

The fossil was further preserved by a calcium carbonate encasement built by the sulfate-reducing bacteria.

The levels of biomarkers from sulfate-reducing bacteria were particularly high in this encasement, Grice says.

The research was funded by the Australian Research Council.
Posted by Mitch Williamson at Wednesday, November 21, 2012