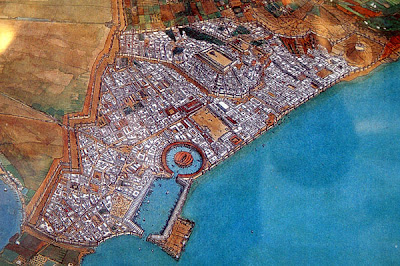 Hannibal's Carthage destroyed by the Romans. 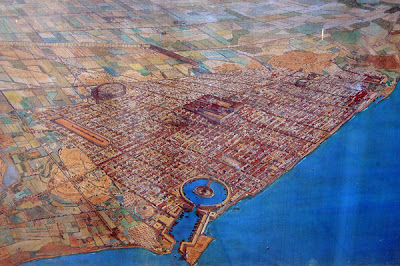 
After its new foundation in 44 BC by Caesar and in a continuous process of integration into the structures of the Roman Empire, C. had developed economically, politically and culturally; especially under the Severi it became one of the important metropolises of the ancient world. It was able to maintain this status well into Late Antiquity – a development in stark contrast to the political and economic crisis which started in the 3rd cent. in the other western provinces. According to panegyrics of Late Antiquity celebrating cities, C. competed for second place after Rome within the Empire (Auson. Urb. 2 and already Hdn. 7,6,1). Together with Alexandria, Milan and Antioch, C. was known as one of largest cities of its time (Lib. Or. 15,59; 20,40). While the epoch of the Severi was a time of assimilation into Roman culture, the fate of the city after the 3rd cent. was marked by Christianisation. After Rome, C. had one of the oldest and earliest organized Christian communities of the ancient West. It quickly developed into the centre of North African Christianity. As a late Roman metropolis, C. experienced the conflicts with the schismatic Donatists and hosted important Church gatherings. The activities of the Church Fathers Tertullian, Cyprian and Augustine in the area, influenced by the metropolis C. and its rich intellectual traditions, stimulated numerous movements which would be important for the whole of Christianity. When the Vandals, who had invaded North Africa as early as 429, conquered C. in 439, their goals were economic and political-strategic. Therefore the Roman element (romanitas) remained dominant in many areas of life. The conquerors limited themselves to the installation and the provisioning of a ruling class and to the introduction of Arianism. Justinian’s intervention in 533 ended the Vandals’ rule. In line with the restructuring of the regained territory now known as Carthago Iustiniana, with C. as its capital, there was an attempt to consolidate the new status of the city as an administrative centre and, beginning in the 6th cent., as residence of the exarch, through building measures and bestowal of privileges. However, the intended renaissance of C. was hindered by military conflicts with hostile Berber tribes and by disagreements within the army. A short phase of regeneration was followed by economic decline and the end of romanitas. The plans of the exarch Heraklius to make C. the capital of the Empire were doomed to failure. The city’s demise was sealed by its conquest by the Arabs: in 698 C. was destroyed. Its successor cities were Kairouan and, especially, Tunis. After the 7th cent. the city’s ruins were used for a long time as a marble quarry, for Arab buildings as well as for cathedrals, for instance those in Genoa and Pisa.