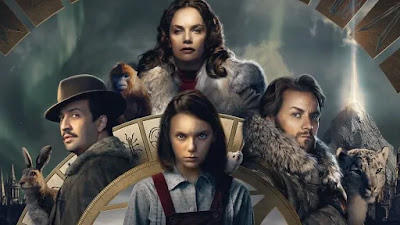 Multiple worlds, armoured bears, dust, daemons. BBC and HBO’s His Dark Materials can be pretty confusing. We’re here to open up the alethiometer and answer a few of your biggest questions about what the crap is going on.

This week is the halfway point of His Dark Materials’ first season, with Lyra (Dafne Keen) finally meeting aeronaut Lee Scoresby (Lin-Manuel Miranda) and Iorek Byrnison, one of the armoured bears of the north. And there will be a lot more to unpack as the season continues. Who is Will? Why are the children being kidnapped? What’s the deal with multiple worlds? What is Lyra’s destiny?

But hopefully, we can shine a little bit of light into this dusty, strange darkness. Let me know in the comments if you have any additional questions and I’ll do my best to answer them...provided they don’t spoil too much for everybody else. Let’s crack open the alethiometer and begin!

The main antagonist of the series, the Magisterium is the governing force that “keeps order” in Lyra’s world. You may have noticed their garments, which are quite clerical. That’s because author Philip Pullman modelled the Magisterium after the Catholic Church—something that was notably missing from the 2007 movie The Golden Compass, as the threat of a boycott from Christians led the studio to remove religious themes altogether.
The Magisterium works in service of the Authority, which is their term for God. We don’t really see them performing many charitable acts or community service. They rarely even hold church service. Instead, they’re focused on keeping order and censoring things they consider to be blasphemous. In that way it’s not a criticism of faith, but rather of control.

The Magisterium is obsessed with three things: order, control, and Dust. The first two make sense, but the last one might seem strange. In the world of His Dark Materials, Dust—with a capital D—is a mysterious substance that connects all intelligent life in the universe and beyond. Folks like Lord Asriel (James McAvoy) and Mrs. Coulter (Ruth Wilson) are obsessed with finding out Dust’s true purpose, albeit for very different reasons.
Dust is attracted to people—specifically adults, not children. It tends to bounce off kids. This is why the Magisterium believes that Dust is actually a manifestation of Original Sin, otherwise known as the moment in the Bible where Adam and Eve ate fruit from the Tree of Knowledge and were cast out of the Garden of Eden. In the Magisterium’s mind, it’s evidence that something changes when innocence becomes experience. What it actually is—well, we wouldn’t want to give that away just yet.

Dust has something to do with daemons (dæmons in the books), which are an integral part of Lyra’s world. A daemon is a physical embodiment of a person’s soul, manifested as an animal. It represents your dual nature, your instincts, and your conscience. In our world, we sometimes have inner monologues or gut feelings. People in Lyra’s world have talking animal sidekicks.
Daemons change shape at will for children, because their personalities are always growing and changing. But upon puberty, they settle into one form, representing a core aspect of your personality. The bond between a human and their daemon is sacred. Hurting one will affect the other, and when a person dies their daemon disappears into Dust (hint hint). Seeing someone without a daemon would be like seeing a person walking around without a head. It just doesn’t happen.

Then, there are the bears. Yes, there are talking bears in this show. The bears of Svalbard (which is actually a real place) have a kingdom in the north, where they tend to keep to themselves—occasionally trading with outsiders. They don’t have daemons, but they do have their armour, which is crafted out of sky-iron, a rare metal. Bears consider their armour to be like their souls…or daemons. A bear without their armour is missing their soul, their prized possession. At the time we meet him in the series, Iorek Byrnison has been cast out of the kingdom for betraying his fellow bears, leaving the kingdom in the control of another.

As of now in the show, there’s a lot we don’t know about the alethiometer yet...and we don’t want to give any of the big reveals away. But in the simplest of terms, it’s a compass-like device, based on the real-world astrolabe, that can read the truth in any situation. Normally it requires years of study, but Lyra is strangely able to master it pretty quickly. You ask the alethiometer a question and something (or someone) provides an honest, truthful answer. Only six were ever made, and the Magisterium yearns to have them all. So long as Lyra has one of the alethiometers, total control is out of their reach.

His Dark Materials streams on Foxtel.