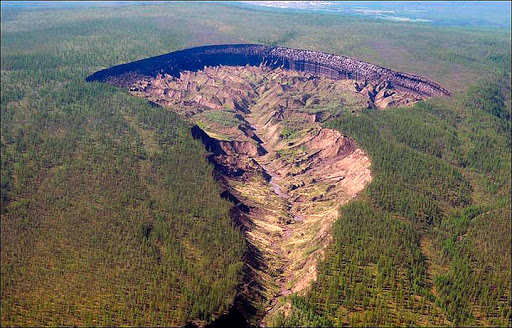 On a spring day in 2019, Alexander Kizyakov rappelled down the 60-meter headwall of the Batagay megaslump in eastern Siberia, pausing to chisel out chunks of ice-rich soil that had been frozen for eons. “One of my hobbies is rock climbing,” says Kizyakov, a permafrost scientist at Lomonosov Moscow State University. Colleagues below sampled the most ancient soil along the base of the cliff. Such work is too dangerous in summertime, when the constant crackling of melting ice is punctuated by groans as slabs of permafrost, some as big as cars, shear off the headwall.

Known to locals as the “gateway to the underworld,” Batagay is the largest thaw slump on the planet. Once just a gully on a slope logged in the 1960s, the scar has expanded year by year, as the permafrost thaws and meltwater carries off the sediment. Now more than 900 meters wide, it epitomizes the vulnerability of permafrost in the Arctic, where temperatures have shot up twice as fast as the global average over the past 30 years.

But it is also a time capsule that is seducing scientists with its snapshots of ancient climates and ecosystems. “It’s a mind-blowing place,” says Thomas Opel, a paleoclimatologist at the Alfred Wegener Institute. Dates from ice and soil gathered at Batagay show it holds the oldest exposed permafrost in Eurasia, spanning the past 650,000 years, Opel and colleagues reported in May at the European Geosciences Union’s online general assembly. That record could reveal how permafrost and surface vegetation responded to past warm climates. “It gives us a window into times when permafrost was stable, and times when it was eroding,” Opel says.

Global warming is inflicting wounds across Siberia. Outbursts of pent-up methane gas in thawing permafrost have pocked Russia’s desolate Yamal and Gydan peninsulas with holes tens of meters across. Apartment buildings are listing and collapsing on the unsteady ground, causing about $2 billion of damage per year to the Russian economy. Forest fires during the past three summers have torched millions of hectares across Siberia, blanketing the land with dark soot and charcoal that absorb heat and accelerate melting.

Intensifying this year’s fires was a heat wave that baked Siberia for the first half of 2020. On 20 June, the town of Verkhoyansk, just 75 kilometers from Batagay and one of the coldest inhabited places on Earth, reached 38°C, the hottest temperature ever recorded in the Arctic. The record-breaking heat “would have been effectively impossible without human-induced climate change,” said the authors of a 15 July study by World Weather Attribution, a collaboration of meteorologists who analyze the possible influence of climate change on extreme weather events.

An abiding question is how much carbon the thawing soil will release to the atmosphere, and whether the lusher growth of Arctic plants in the warming climate will absorb enough carbon to offset the release. The Arctic may already have reached a tipping point: Based on observations at 100 field sites, northern permafrost released on average about 600 million tons more carbon than vegetation absorbed each year from 2003 to 2017, scientists estimated in October 2019.

Scientists are venturing to Batagay in annual campaigns to learn what it can say on the matter. Visits, organized by the Institute of Applied Ecology of the North in Yakutsk, are not for the faint of heart. In 2014, Kseniia Ashastina slogged through 3 kilometers of mosquito-infested forest to reach the headwall’s edge. “You hear a lot of cracking noises as you get closer, and all of a sudden there are no trees and you’re standing on an overhang,” says Ashastina, a paleobotanist at the Max Planck Institute for the Science of Human History. She and colleagues from the Senckenberg Research Institute and Natural History Museum lodged with Indigenous Siberians—Evens and Sakha—some of whom fear the megaslump. “They say it’s eating their land, swallowing up the trees and their sacred places,” she says.

To learn the age of the exposed permafrost, Opel’s team relies on luminescence dating, which reveals the last time minerals in the soil saw daylight, and a new Russian technique for dating chlorine in the ice. The dates allow them to match soil layers to the known climate record, while abundances of two isotopes trapped in ice wedges, oxygen-18 and deuterium, are proxies for local temperatures. Assaying Batagay’s soil composition should yield insights into how much carbon the permafrost sequestered over the millennia.

The permafrost also holds glimpses of ancient Arctic ecosystems. Sampling trapped plant remains, the team learned that during the last ice age, when winter temperatures plunged even lower than in modern times, the vegetation was surprisingly lush, supporting woolly mammoths, woolly rhinos, and other now-vanished herbivores in a meadow steppe ecosystem. “It was a paradise for the foraging animals,” Ashastina says.

Sometimes, the remains of these lost creatures tumble out of the headwall in exquisite condition. In 2018, scientists recovered a young ginger-colored Lena horse (Equus lenensis), an extinct relative of the Yakutian horse, with intact soft tissue. Scientists hope to find a live cell so they can attempt to clone the 42,000-year-old foal. Some of its preserved muscle is particularly promising, says P. Olof Olsson, a molecular biologist with the Abu Dhabi Biotech Research Foundation, which is teaming up on the effort with North-Eastern Federal University in Yakutsk. “I’m skeptically optimistic,” Olsson says. “At least, it’s not impossible.”

As the elements carve up more of the Batagay megaslump, it could transport scientists deeper into time. Glaciers scour away soil as they advance, but they largely bypassed Siberia during recent ice ages, leaving the permafrost in some areas hundreds of meters thick. For decades, as the hot summers liquefied its ice-rich soil, Batagay’s headwall advanced about 10 meters per year, says Frank Guenther, a permafrost researcher at the University of Potsdam. Since 2016, he says, that rate has surged to 12 to 14 meters per year. It’s harder to peg how fast the slump is deepening, and thus how much farther back in time the thaw is penetrating. The most ancient permafrost ever dated, from Canada’s Yukon territory, is 740,000 years old. As much as climate watchers may cringe at the thought, several more roasting Siberian summers could push the Batagay megaslump to claim another record.