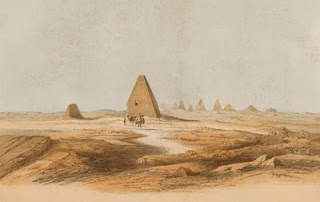 The pyramids of Gebel Barkal by Ernst Weidenbach, 1845 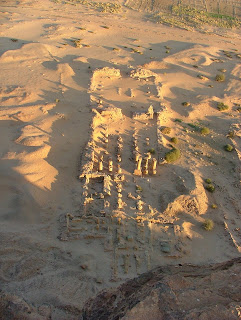 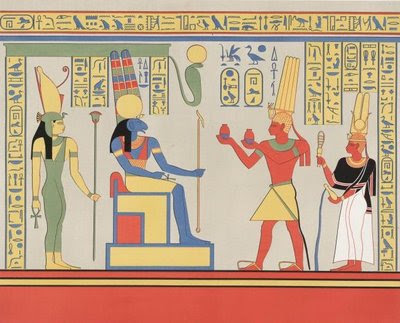 Pharaoh and a Temple Chantress present offerings to Amon-Re. The lady on the left wears the crown of Lower and Upper Egypt. Art from Gebel Barkal, by Ernst Weidenbach, 1845. 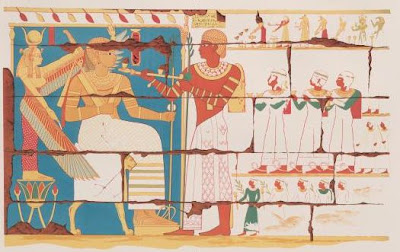 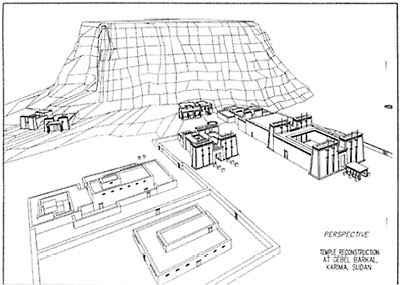 Reconstruction of the Gebel Barkal temples.

Gebel Barkal, on the western edge of modern Karima, Sudan, is an isolated sandstone butte 1km from the right (northwest) bank of the Nile and about 20km downstream from the Fourth Cataract in Upper Nubia (18°32' N, 31°49' E). Triangular in outline, the mountain is about 1km in circumference, rises 102m from present ground level, and faces the river with a sheer cliff 93.06m high. Marking the location of the ancient city of Napata, it is bounded on the southeast by a huge cult precinct and on the west by an ancient cemetery, including royal pyramids. Described in the early nineteenth century by George Waddington and Barnard Hanbury, Frédéric Cailliaud, Louis Linant de Bellefonds, George Hoskins, John Lowell, Richard Lepsius and John Gardner Wilkinson, among others, the site was briefly excavated in 1897 by E.Wallis Budge for the British Museum and in 1907 by James Breasted for the University of Chicago. The first major excavations were undertaken by George Reisner and his Harvard University-Museum of Fine Arts (MFA) Boston expedition from 1916 to 1920. These investigations have been followed more recently by an expedition of the University of Rome, under F.Sergio Donadoni (1972 to present), by a renewed expedition of the MFA under Timothy Kendall (1986 to present) and, from 1996, by an expedition of the Fundacion Clos, Barcelona, in the Barkal cemetery.

From at least the 18th Dynasty, Gebel Barkal was identified as a sacred hill. The Egyptians declared it the chief Nubian residence of the Theban god Amen, and for this reason they called it “The Pure Mountain” ( ) and “Thrones [or Throne] of the Two Lands” (Nswt [or Nst]-T3wy): or the source of Amen’s most ancient epithet (Lord of the Thrones of the Two Lands). The name “Napata” (Npt) is thought to have been derived from the word ipt (sanctuary, forbidden place), and the god worshipped here, by the 19th Dynasty, would come to be called “Amen of Napata,” or, by Meroitic times, “Amanapa.”

The Egyptians, and perhaps the earlier Nubians as well, attached religious significance to the mountain because of the unusual freestanding pinnacle on its southwestern corner. Viewed from different angles, this statue-like, natural rock formation appeared to them variously as (a) a uraeus (sacred cobra) wearing the White Crown of Upper Egypt, (b) a uraeus wearing a sun disk, and (c) an erect phallus, evocative of the procreative forms of Amen/Re-Atum. The mountain came to be seen not only as a primeval source of creation, but also as the original home of the sun god’s uraeus (the “Eye of Re”) and the king’s uraeus, and thus an important source of kingship.

Pottery of the Neolithic, Pre-Kerma and Kerma periods has been found on or beside the mountain, indicating that the site probably had been continuously occupied long before the Egyptians conquered Upper Nubia in the early 18th Dynasty. A cave site on the western cliff of Gebel Barkal was apparently frequently visited in pre-18th Dynasty times as a source of the fine white clayey material kaolinite. The earliest evidence of Egyptian settlement and building activity is from the reign of Tuthmose III. His stela at Gebel Barkal, dated to his 47th regnal year, is the first to mention Gebel Barkal by name and to refer to an existing native settlement and a newly built Egyptian fort called “Repelling the Foreigners.” The fragmentary stela describes a miracle by which the Egyptians identified the mountain with Amen, although there is reason to believe that the Egyptians may have identified a ram-headed local Nubian god as an alternate form of their own supreme god and to have simply taken over a pre-existing sacred place.

Tuthmose III built the first Amen sanctuary (labeled B 500-sub by Reisner) at Gebel Barkal. The stela at Amada of Amenhotep II is the first to record a town here called Napata, from whose “walls” a Syrian chief was said to have been hung. Temple building activity continued under Tuthmose IV, who added temples B 700-sub, B 600-sub and B 300-sub. During the Amarna period (reign of Amenhotep IV/Akhenaten), the name of Amen was methodically erased from local monuments, revealing that the king even attempted to eradicate the local cult in Nubia. It was restored, however, under Tutankhamen and Horemheb, who erected the nucleus of temple B 500. This temple was greatly enlarged in the 19th Dynasty by Seti I and Ramesses II, with the addition to it of a hypostyle hall (B 502), probably of 72 columns. After Ramesses II’s reign all evidence for building activity ceases, and the temples appear to have fallen into ruin and disuse until the advent of the earliest Napatan monarchy (circa 850–800 BC).

The Amen cult and sanctuary at Gebel Barkal were revived by the native Nubian kings buried at nearby el-Kurru. Why they became adherents to the Egyptian cult of Amen remains unclear, but one theory suggests that their conversion may have been brought about by expatriate Theban priests, fleeing persecutions caused by civil disturbances in Upper Egypt at the end of the 22nd Dynasty. The earliest Napatan temple (B 800-sub) was of mudbrick with stone columns, and this can almost certainly be attributed to Alara (circa 785–760 BC), the first Napatan king known by name. Its stone extension, as well as the lowest level of the adjacent Napatan palace (B 1200), can be attributed to his successor, Kashta (circa 760–747 BC), the first Kushite king to reign also in Egypt. His son Piye (circa 747–716 BC) refurbished the old Egyptian temple B 500, first encasing it in new masonry and adding new rooms, then later restoring the hypostyle hall (B 502) with 46 columns and adding a new outer court (B 501). He also refurbished B 800 in stone. These parallel Amen temples are presumed to have been dedicated to Amen of Napata and Amen of Karnak, respectively, since each god was said to have conferred upon the Kushite kings a half part of their kingship. Piye’s son and third successor, Taharka (circa 690–664 BC), added temples B 200 and 300, dedicated to the goddesses Hathor, Mut, Tefnut and Sekhmet, who were all aspects of the “Eye of Re,” manifested in Gebel Barkal’s uraeiform pinnacle beneath which the temples were built. He also placed a statue and inscription, covered with gold sheet, on the summit of the pinnacle.

Tanutamei (circa 664–553 BC), the last Kushite ruler of Egypt, contributed a kiosk (B 502) inside B 500. His successor Atlanersa (circa 653–643 BC) started construction on the smaller temple B 700, but died before it was completed, leaving the work to be finished by his heir Senkamenisken (circa 643–623 BC). This temple seems to have been dedicated to the Osirian aspects of Amen, as well as to the Nubian god Dedwen, and all deceased kings; its bark stand is now in the MFA, Boston. B 800 and 1200 were again restored during the reign of Anlamani (circa 623–600 BC); the latter was completed by Aspelta (circa 600–580 BC). Shortly afterward the temples and palace were burned, and the many royal statues in B 500 were pulled down and vandalized. This, and contemporary damage noted at other Napatan sites, is almost certainly to be attributed to the invasion of Nubia by the army of Psamtik II (26th Dynasty) in 593 BC.

Although this destruction may have been a primary cause of the move of the Kushite court to Meroe, the Gebel Barkal sanctuary seems to have been restored during the sixth century BC. Unfortunately, no royal names can yet be connected with this restoration. In the early fourth century BC Harsiotef again restored B 800, B900 and the palace B 1200, and Nastasen restored Taharka’s pinnacle monument, adding his own name to it. Both Harsiotef and Nastasen also set up stelae at Gebel Barkal detailing their works at the site, works that can no longer be traced in the archaeological remains. Following a probable final restoration of B 1200 by Amenislo (circa 260–250 BC), a new palace (B 100) was erected about 75m in front of the former during the second century BC.

The rock ledges of Hillet el-Arab, immediately southwest of Gebel Barkal, were evidently used continuously as a burial place beginning in the New Kingdom; they are honeycombed with rock-cut tombs and are presently being excavated by a joint Sudanese and Italian Mission under Irene Vincentelli-Liverani. The desert area immediately west of Gebel Barkal was also a cemetery, probably as early as the 25th Dynasty, and a ruined royal tomb, recently discovered by the archaeological mission of the Fondacion Clos, apparently belongs to the mid-sixth century BC. Again, in the early third century BC, a king, perhaps Arnekhameni, selected the site for his pyramid tomb and those of his several queens. While his immediate successors preferred to build their tombs at Meroe, more royalty erected their pyramids at Gebel Barkal during the second and first centuries BC.

Prior to the second century BC, the Gebel Barkal sanctuary seems to have been centered primarily in an arc around the pinnacle, with its western extremity marked by B 200 and its eastern by B 1700, the yet unexcavated temple bakeries. Later, however, when Meroe was the capital of the Kushite state, there was a massive new development of the area northeast of B 1700. Several new temples were built (B 1800–2400), which have not yet been excavated, as well as a large new palace (B 1500), which replaced B 100. B 500 was extensively restored, and a new kiosk (B 551) was added in front of B 501. All of this construction probably dates to the reigns of Amenishakheto, Natakameni and Amenitore, a program very likely undertaken as a result of the reported destruction of Napata at the hands of the Roman general Petronius about 24 BC.

Throughout most of the history of Kush, Gebel Barkal remained the most important religious center of the kingdom, and was for many centuries the primary center for coronations and kingship ritual. After the decline of the Meroitic kingdom (circa AD 350), the site became a Christian village and cemetery.