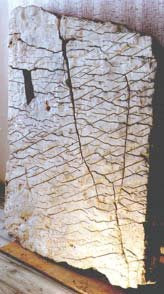 Scientists at Bashkir State University in Russia claim to have found infallible proof of the existence of a highly developed civilization in the very ancient past. Their evidence is a one-ton plus stone slab (about five feet long, by three-and-a-half feet wide, and six inches thick) which they estimate to be, perhaps, millions of years old. Located beneath the house of a local community leader in the town of Ufa, the slab’s surface is a precisely detailed 3-D relief map of the Ural Mountain region. Its discoverer has dubbed it “The Map of the Creator.”

The discoverer, physics and mathematics professor Alexander Chuvyrov had been researching evidence of ancient Chinese influence in the area and had heard stories by early 20th century investigators of several mysterious ancient slabs. Though interested, Chuvyrov had despaired of finding one himself, when the chairman of the local agricultural committee told him of such a stone beneath his own house.

After a difficult recovery operation, Chuvyrov reports being startled to discover that the map accurately reveals many presently existing natural features plus many which no longer exist, including a system of channels, weirs and dams, as well as inscriptions in an unknown language (Chinese has been ruled out).

First discovered in July, 1999 the slab has been subjected to numerous tests by Russian scientists. The results have been baffling, to say the least. Determinations of age have been based on radio carbon dating of shells embedded in the material, but not much can be said with certainty about the origins of the stone. The technical difficulty of creating such an accurate relief map is far beyond that of any ancient culture previously believed by orthodox scientists to have occupied the region, or, for that matter, any place on earth. Such a production would, in fact, be very difficult to replicate even now.

Some investigators believe the slab is a fragment of a complete map of the earth. A search for the missing pieces is under way.