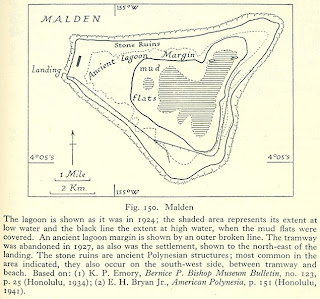 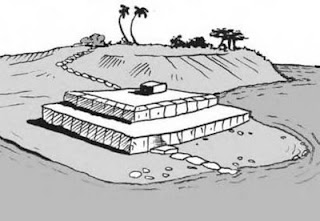 The desolate Malden Island contains an assortment of megalithic monuments.

On the barren Pacific islet of Malden, completely uninhabited by native islanders since first discovered by European explorers in the early 1800s, lie the remains of a mysterious megalithic culture. From several temple complexes near the center of the island radiates an ancient highway system that spans across the island like a giant spider web. An ancient high­way system composed of large basalt slabs fitted tightly together runs across the island, crosses the beach and disappears under the waves of the Pacific. The ancient highways on Malden Island, better described as “paved ways,” are very similar to the Ara Metua, a paved road on Rarotonga Island, 1,000 miles (1,610 km) to the south of Malden. The Ara Metua road on Rarotonga is essentially an island circuit road that goes around the island. Rarotonga, like Malden Island and many others in the Pacific, has a number of pyramid-platforms connected by the megalithic roads.

Malden Island is a deserted location a thousand miles from anywhere. Why it contains temples, pyramid-platforms and ancient paved paths leading directly into the ocean is still a mystery.

Several step-pyramids, platforms, megaliths, and strange stacks of stones are scattered across Malden Island. Stepped and truncated pyramids measure in the range of 30 feet (9 m) in height, 20 to 60 feet (6-18 m) in width, and 90 to 200 feet (27-60 m) in length. The pyramids are approached by paved ways from the sea and are capped with dolmens or “compass stones.” These 40 stone temples on Malden Island are described as similar in design to the buildings of Nan Madol on Pohnpei, some 3,400 miles (5,475 km) away.

What was the purpose of all these platforms? Were they part of an ancient sun-worshipping cult, altars for Polynesian chiefs, or a “crossroad” meeting place for a seafaring nation? And what of the paved ways leading into the sea? Evidence for the lost Pacific continent of Mu, or Lemuria? Speculation also suggests that Malden Island is positioned on a spe­cial power point upon the Earth Grid, acknowledged and venerated by the ancients. This island may have been an important stopover place on trans-Pacific voyages, but the reality is that no one really knows. One thing is for certain; some mysterious group put a large amount of effort into building megalithic monuments on an island that could hardly support even a small population.