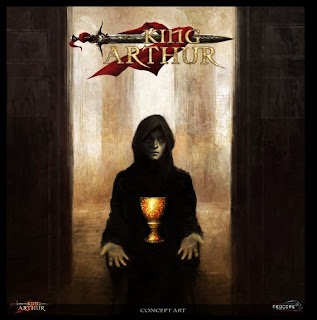 “And then on the following day they came to Arthur’s court. They seemed like giants, wearing black steel and strange weapons. They were powerful and invincible warriors and people called them the Knights. No one knows who they are. No one knows where they came from.

But they might be Arthur’s only hope to stand against the coming tide of wonders, mayhem and awe.”

NeocoreGames, a fresh and talented game developer team from Hungary would like to announce their new PC-only RPG/Strategy game King Arthur.

Three years in the making, this grandiose storytelling game by NeocoreGames is an innovative mixture of the best gameplay elements from the RPG and strategy games, with a unique and beautiful visual representation.

Players will guide the legendary King Arthur in the game and conquer the warring provinces of Britannia until they unite the realm. Meanwhile, they will recruit the fabled knights of the Round Table and send them to adventures, personally improving them to become the most powerful he­roes of the realm. They will build the majestic Camelot and govern a growing realm, while commandeering spectacular battles where many thousands clash on the field. Every deci­sion they make will determine Arthur’s Morality as a king, creating their own legend – Arthur could a rightful ruler or ruthless monarch; either a Christian or a pagan king.

King Arthur is based on the rich mythology of the Celtic and Anglo-Saxon legends that inspired many artists in the past, from J.R.R. Tolkien to the modern masters of fan­tasy, but at the same time it has a unique and innovative approach to its chosen background.

King Arthur will be released in the first half of 2009 and offers more than 100 hours of gameplay and multiplayer gaming modes for all fans of fantasy and hardcore gamers.