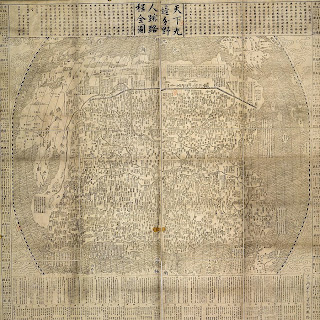 Maps provide an excellent illustration of the way different cultures conceive of and represent the world around them. Whether maps depict street names and shops in small local spaces or the entire cosmos, maps reflect the cultural values of both their producers and their intended audience. Naturally then, Chinese maps of “the world” tell us a great deal about the way the Chinese have viewed themselves and others through time and across political boundaries.

Since at least the tenth century Chinese scholars have produced what we might call “world maps.” However, until the late nineteenth century, people contemplating any given “world map” often had difficulty determining exactly where “China” ended and where the rest of “the world” began.This difficulty arose because large-scale cartographic representations of space during late imperial times in China involved a number of overlapping political, cultural, and geographical images, identified either by dynastic names (Song,Yuan, Ming, and Qing) or by designations such as the Central (Cultural) Florescence (a state or period of flourishing, Zhonghua), the Spiritual Region (Shenzhou), the Nine Regions (Jiuzhou), the Central Kingdom (Zhongguo), the Central Land (Zhongtu), and All under Heaven (Tianxia). The relationship between these conceptions is by no means always evident in traditional Chinese maps.

Many, if not most, premodern Chinese world maps show an abiding concern with the so-called tributary system, which endured as a prominent feature of China’s foreign policy down to the late nineteenth century. This system, which underwent many changes through time, was designed to confirm the long-standing theory that all of the people living beyond China’s constantly shifting borders, like all those people within them, were in some sense Chinese subjects.

The bringing of tribute to the Chinese emperor by foreign “representatives” testified to this conceit. As loyal subjects they dated their communications by the Chinese calendar, came to court, presented their “local products,” and performed all appropriate rituals of submission, including the standard three kneelings and nine prostrations (kowtow). In turn they received a patent of appointment as well as an official seal for correspondence with the Chinese “Son of Heaven.” They were given lavish presents, offered protection, and often granted privileges of trade at the frontier and at the capital. This assumption of universal overlordship blurred the distinction between maps of “China” and Chinese maps of “the world.”

The earliest existing world maps in China date from the Song dynasty (960–1279 CE). One of the most famous examples is the amorphous (having no definite form) Huayi tu (Map of China and the Barbarians, 1136), a 3- meter-square work, carved in stone, that boasts about five hundred place names and identifies a dozen or so rivers. The map shows a few foreign lands visually—notably, Korea and India—but it represents more than a hundred different groups of “barbarian” peoples only by written notes in the margins. Several of these notes refer specifically to tributary relationships, past and present.

However, not all Song dynasty renderings of space followed this amorphous model. Indeed, inscribed on the reverse side of the Huayi tu is an astonishingly “modern”- looking work entitled the Yuji tu (Map of the Tracks of Yu, 1136). It is the earliest existing example of the so-called latticework cartographic grid in China.The outstanding feature of this map, in addition to the near total absence of written commentary, is its extremely “accurate” depiction of major landforms, including the Shandong Peninsula, as well as China’s two major waterways, the Huang (Yellow) River and the Chang (Yangzi) River.

Throughout the remainder of the imperial era, down to 1911, Chinese cartographers continued to produce both kinds of world maps. However, tributary-oriented “cultural” representations of the Huayi tu variety vastly outnumbered mathematically accurate ones. Although Jesuit missionaries brought sophisticated surveying techniques to China in the seventeenth century, enabling the Qing dynasty (1644–1912) to create extraordinarily “accurate” maps of the empire for certain political and strategic purposes, they did not inspire a more general cartographic revolution in China, much less provoke a change in the way the Chinese viewed the world.

To be sure, Chinese scholars were not averse to using Western cartographic knowledge selectively. Consider, for example, Cao Junyi’s Tianxia jiubian fenye renji lucheng quantu (A Complete Map of Allotted Fields, Human Events and Travel Routes [within and without] the Nine Border Areas under Heaven, 1644).This expansive work acknowledges the existence of Europe, Africa, the Middle East, and India and gestures toward mathematical accuracy by providing longitudinal lines and degrees (which do not, however, correlate well with specific locations). However, the Middle East and India are represented primarily by cartouches (ornate or ornamental frames), and Africa—which appears only about one-tenth the size of China—hangs down on the western side of Cao’s map as if it were little more than a protective flank. Europe, tiny and even more marginal, is barely recognizable in the upper northwest portion of the map. Significantly, in his treatment of “barbarians” Cao does not differentiate clearly between actual foreign countries and the lands and peoples described in ancient mythical works such as the Shanhai jing (Classic of Mountains and Seas).

We can see another effort to integrate radically different cartographic traditions into a single production in the work of Ma Junliang (flourished c. 1780). Although his Jingban tianwen quantu (Capital Edition of a Complete Map [Based on] Astronomy, c. 1790) is dominated by a rectangular Huayi tu-style rendering of “the world,” with inscriptions that emphasize the process by which “barbarian” envoys come to China and offer themselves as vassals of the Qing dynasty, it also boasts a seventeenth century Chinese version of a Jesuit map of the Western Hemisphere and a similarly structured, but more detailed, Chinese map of the Eastern Hemisphere that was first published by Chen Lunjiong in his Haiguo wenjian lu (Record of Things Heard and Seen in the Maritime Countries) in 1730.

The rise of Western imperialism during the nineteenth century brought a new level of global awareness to China. Intelligence-gathering efforts during the Anglo- Chinese War of 1839–1842 began the process, and by the end of the Sino-Japanese War (1894–1895) the traditional Chinese worldview had been completely undermined. From this time onward in elite journals and even popular almanacs and encyclopedias, Chinese readers sought ever more accurate knowledge about other parts of the world, including Japan.

As in many other aspects of Chinese life after 1895, the rise of Chinese nationalism—generated by China’s humiliating defeat by the Japanese—brought a revolution in Chinese cartography. One revealing example is a map taken from a popular almanac of 1912—the year the Qing dynasty fell. Although not particularly sophisticated in terms of mathematical cartography, it is instructive because its commentaries identify all the places taken from China by foreign imperialism—including the province of Taiwan and the former tributary states of Korea, the Liuqiu Islands, and Vietnam. Chinese cartography had suddenly become irrevocably “global” in a radically new and highly nationalistic way.