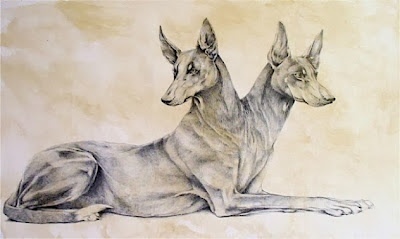 Two-headed dog of Geryon, one of the monstrous offspring of Typhon and Echidne and father of the Sphinx, either by Echidne or the Chimaera. He was killed by Heracles, along with Eurytion, when Heracles was sent to steal the cattle of Geryon, which Orthros and Eurytion guarded.

The word orthros in Greek means "morning twilight." His name was also spelt Orthos, after another word meaning "straight" or "height."

Hesiod, Theogony 326 ff (trans. Evelyn-White) (Greek epic C8th or C7th B.C.):
"But she [the Khimaira or perhaps Ekhidna] in love with Orthos, mothered the deadly Sphinx . . . and the Nemeian lion."

Hesiod, Theogony 293 ff:
"[Herakles] killed Orthos and the oxherd Eurytion out in that gloomy meadow beyond the fabulous Okeanos."

Pseudo-Apollodorus, Bibliotheca 2. 106 - 108 (trans. Aldrich) (Greek mythographer C2nd A.D.):
"He [Geryon] owned crimson-colored cattle, which were herded by Eurytion and protected by Orthos, the hound with two heads born of Ekhidna and Typhon . . . When he [Herakles] reached Erytheia he camped on Mount Abas. The dog smelled him there and went after him, but he struck at it with his club, and when the cowherd Eurytion came to help the dog, he slew him as well."

Quintus Smyrnaeus, Fall of Troy 6. 249 ff (trans. Way) (Greek epic C4th A.D.):
"There [depicted on the shield of Eurypylos son of Herakles] lay the bulk of giant Geryon dead mid his kine . . . Before him slain lay that most murderous hound Orthros, in furious might like Kerberos his brother-hound: a herdman lay thereby, Eurytion, all bedabbled with his blood."
Posted by Mitch Williamson at Saturday, November 16, 2013