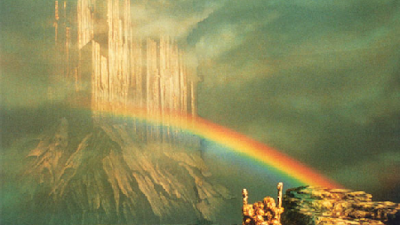 In Norse mythology, Fólkvangr (“field of the host” or “people-field” or “army-field”) is a meadow or field ruled over by the goddess Freyja where half of those that die in combat go upon death, while the other half go to the god Odin in Valhalla.

To go to either Valhalla or Folkvangr is to be chosen for one's valor and skill.  Which of these halls you find yourself in depends entirely on who chose you: Odin's chosen are in Valhalla, while Freyja's are in Folkvangr.  However, these should not be thought of as "paradises," nor are they the only ones.  There are a great many possible afterlifes in the germano-celtic beliefs, and most of them are defined by a certain purpose.  In the case of these two, those who dwell there (the Einherjar) will fight on our behalf at the Ragnarok, and so were chosen for qualities that suit that purpose.

Many, if not most, of the dead go to Hel (sometimes called Helheim) -- but this is not comparable to the "hell" of Christianity, as it is not necessarily a place of punishment.  There is no Norse/German/Celtic equivalent to the idea of "salvation" so there is no need for an eternal punishment.  The main distinction between Hel and the other possibilities, is that Hel is not a place of distinct purpose.  It is simply a place to dwell, and wait, while feasting with Baldr and Hella in her hall.
Posted by Mitch Williamson at Saturday, November 16, 2013