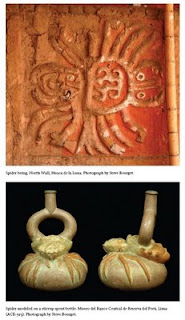 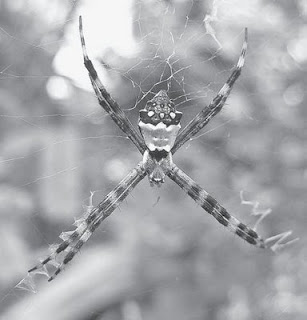 The funerary context of the Old Lord of Sipán in Tomb 3 offers the most singular and clear examples of spider representations on the ornaments of elite personages of Moche society (Alva 1994; Alva and Donnan 1993). These include the pectoral of ten biconvex pieces of gold, mentioned above. Each piece of the necklace displays a spider figure centered on its web, and each spider exhibits the image of a human head on its abdomen. Each human head is adorned with a collar of nine beads, which coincide with the number of body segments of the spider A. argentata. The web is composed of seven concentric circles and twenty crossing strands. The reverse side displays a spiral of six interlinked spokes. Three of the spokes resemble serpent-birds with serrated backs, while the other three are plain bands. The interior space between the two halves contains three bells, which could represent spider eggs but also serve as rattles.

There are no other recorded representations of such spiders within the other burial contexts of the funerary platform at Sipán. Nevertheless, there are images of the so-called Spider Decapitator. In the funerary context of the Old Lord, for example, the excavators recuperated two groups of ten gold and silver bells, along with a backflap made of gold, all depicting a similar figure. The figure illustrated has bilobed ears and a ferocious face displaying fangs. In one hand he holds a knife, while in the other he carries a decapitated head. This individual is further adorned by a semicircular headdress with the face of an owl in the center, a crenulated belt, and a shirt of longitudinal bands. From the shoulders and belt emerge four diagonal pairs of spider legs (Cordy-Collins 1992). Careful observation suggests that the X form and transverse segments of these defined extremities resemble those characteristic of the spider A. argentata. Additionally, there exists a close similarity between the shape of these bells and backflaps—a semicircular design lined with spheres— and the broad, flaring, multilobed abdomen of the spider Argiope argentata.

In the other funerary contexts at Sipán, elite individuals possessed bells and backflaps similar to the images from the tomb of the Old Lord. One looted funerary context recovered at the beginning of the project contained gold and copper bells of an undefined number, along with a large gold backflap, some of which clearly featured the Spider Decapitator (Alva and Donnan 1993). In a similar manner, this spider deity was depicted in the well-known funerary context of the Lord of Sipán on two gold bells, two backflaps (gold and silver), and a small, half-moon crown of gold. A context of lesser rank, Tomb 7, excavated in the same funerary platform, pertained to a pair of adolescents. It contained, among other offerings, a stirrup spout bottle with a high-relief decoration of an anthropomorphic being in profile holding a knife in one hand and a captured bird in the other—clearly a decapitator. The figure also carries a bell with an inscribed face and exhibits appendages in the form of spider legs.

The funerary contexts at Sipán thus actively reinforce certain conceptions regarding the symbolic significance of certain spider species, most notably Argiope argentata. The dual representation of spiders in Moche iconography as naturalistic and anthropomorphic beings remains consistent from the Cupisnique tradition. Yet it is the manner of representation in the funerary assemblage of the Old Lord that provides the most concrete information for identifying this particular species of spider. It visually demonstrates the correspondence between the natural model and the symbolic role that the spider assumes in Moche culture.

In Book 4 of Historia de nuevo mundo ([1653] 1956), Father Cobo observed that the spiders in the Andean world differ in size, color, and shape, and that certain medium-sized spiders appear to represent the shape of a human face on their abdomen, though varying in design. Although brief, this statement indicates the attention that certain spider species received in the greater Andean region based on their resemblance to the human face. This feature most certainly identifies spiders of the genus Argiope. Indeed, it seems that Father Cobo described the same image that the Moche expressed in the pectoral beads associated with the Old Lord of Sipán.