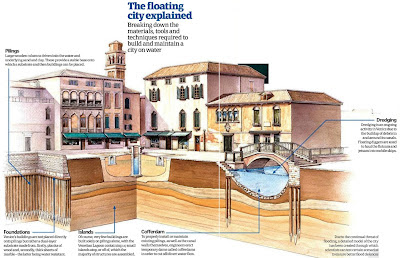 Venice in the ninth and tenth centuries was a medieval city, where pigs roamed about the streets and where pastures and gardens interrupted the vista of houses and churches. There were districts with the epithet “In the Marsh” or “In the Wilderness” or “In the Seaweed.” The citizens travelled on horseback along the main street, the Merceria, and tethered their animals to the great elder trees which flourished in what is now the Piazza S. Marco or Saint Mark’s Square (otherwise simply known as the Piazza). There were flat wooden bridges, without steps, connecting the islands. There were trees along the banks of the canals. On the surrounding islands there were meadows where cattle and sheep grazed; there were vineyards and orchards; there were ponds and small lakes. On the central islands, which gradually coalesced, there were courtyards and narrow alleys that bequeathed to the calli of modern Venice their unique circuitry. In front of the houses of stone, or even of the poorer houses of wood and reeds, were short stretches of land; these became the fondamenta of the mature city, the streets running along the canals.

By the end of the first quarter of the ninth century the area around what is now Saint Mark’s Square had been completed. There was a ducal palace or castle here, together with a large ducal chapel dedicated to the Byzantine Saint Theodore. The more important families also built residences here, to be close to the centre of power. Eventually the fields were cleared to make way for a piazza; a large pool or fishing-pond was filled in, thus forming the piazzetta or little piazza in front of the ducal palace. This duopoly of sacred and secular authority held its place on the site for more than a thousand years.

It was not called Venezia until the thirteenth century. But the region of the lagoon was known as Veneto or Venetia. The Latin term for Venice was always Venetiae, thus registering its origin as a federation of islands or cities. It has nineteen different appellations, ranging from Venegia to Veniexia, thus affirming its multiple identity. It might be construed a portmanteau word, containing Venus and ice.

Venice had no single or distinct origin. The cities of the Italian mainland had been settled through prehistory, their territory defined by their burial grounds and defended by a circumambient wall. They had grown in organic fashion from a ritual centre to an expanding periphery. The reverence for the city is linked to the reverence for place and reverence for the dead who lie interred there. The earliest cities are primeval in origin. From the beginning Venice had no perimeter. It had no outline. It coalesced from a hundred different points. Venice, in a literal sense, had no roots. It had a fluid origin indeed, one written in water. It is insecurely placed in the world. That is why it has always been subject to anxiety, as in the present “Venice in Peril” campaign.

Venice has therefore sought to define itself. It has sought for origins. It has felt obliged to uncover some hidden, or reveal some absent, origin. Machiavelli wrote that “the beginnings of religions and of republics and of kingdoms must possess some goodness by means of which they gain their first reputation and their first growth.” This was the problem facing the Venetians. They had, in that sense, no “goodness.”

So they invented stories of origin, all of them involving some kind of divine dispensation—not least in the apparently “historical” fact that the Venetians were Christian exiles fleeing from pagan invaders. On the pavement of S. Maria della Salute, in Venice, is carved the inscription “unde origo inde salus” or salvation springs from origin. Thus there grew up certain exquisite and elaborate legends of the beginning. They are not to be dismissed. Legends represent the earliest form of poetry. Venice is the place of legends, particularly of religious legends, just as it has always been a city of miracles.

The people of Altino were in doubt where to flee from the pagans, until they heard a voice from the heavens declaring “Go up into the tower and look towards the stars.” When they climbed the tower, the reflections of the stars in the water made a path toward the islands of the lagoon. In another version of this story all the birds of the region were seen, with their young in their beaks, flying towards the islands. The voice out of the bright cloud, calling the exiles in their boats, has been heard at the beginning of this chapter. Eight of the earliest churches of Venice were established by divine decree. Saint Magnus was told in a vision to build a church where he first saw a flock of sheep; this was in Castello. The Virgin Mary appeared in a bright cloud, heralding the rise of S. Maria Formosa. A great assembly of birds chose the site of the church of S. Raphael. A red cloud hovered above the site of S. Salvatore near the Rialto Bridge. There were other more secular legends that the Venetians had as their ancestors the Romans or even the Trojans but they, too, can be discounted. These legends, like Venice itself, have no foundation.

The city was built upon water by celestial decree. It was a miracle, in itself, to build upon the sea. Thus it became a city of miracles. It was a predestined spot, a providential site. Everywhere in the Venetian chronicles there is a great and shining image of the city. Venice became part of the history of human redemption. Its divine origin was attested by its perfect constitution, enduring for a thousand years, and even by its mercantile supremacy. In paintings by Venetian artists God the Father and the Holy Spirit preside over Saint Mark’s Square. On the Rialto Bridge are carved the figures of Gabriel and the Virgin Mary at the moment of the Annunciation. Venice was idealised beyond any recalcitrant historical fact or inglorious episode.

Yet the real origins of Venice, scattered or random as they are, vouchsafe a great truth about the city. They convey certain characteristics, or certain qualities, to the nature of life there. Every organic thing wishes to give form and expression to its own nature; and so, by obscure presentiment and by the steady aggregate of communal desires, Venice took shape. The statue is latent in the marble. The Venetians had no arable land of their own, so they were obliged to earn their living by trade and industry. The city which was half land and half water devised a quintessentially “mixed” constitution in which the various forces of the state were balanced. There was a constant preoccupation, among all sections of the community, with stability and continuity. Where are those qualities more necessary than in a place shifting and uncertain? A city created by exiles became, over the centuries, a home for many and various refugees. Its empire overseas, and its incursions into mainland Italy, were all based upon the necessity for self-preservation. It always perceived itself to be a city under threat. Venice did not emerge from the union of rural peasantry. It was always urban. Venice was not, in its infancy, a feudal society. By the tenth century it was already known as “la civitas Rivoalti,” civitas implying a citizen state.

The great and enduring fact, however, was the fight against the sea. Out of this arose the need for common purpose and community of effort. There was no antagonism between the individual and the collective or, rather, the Venetian individual through the centuries subsumed himself or herself within the organism as a whole. It is an organism that, like the human organism, can be seen as a unity. It obeys its own laws of growth and change. It has an internal dynamism. It is more than the sum of its parts. Each aspect of Venetian culture and society reflects the whole.

From the ninth century three Venetian commissioners were appointed to administer and oversee the defence and reclamation of the land. An entire bureaucracy eventually emerged to control the depredations of the sea. From the beginning Venice was a state of intervention. The earliest sea-defences consisted of wooden stakes interwoven with wickerwork; at a later date rivers were diverted, and great walls of stone built against the water.

Land could not be reclaimed, nor islands joined, without the cooperation of neighbour with neighbour and community with community. Dams could not be built without the unity derived from common interest. So from the beginning Venetians were possessed by the idea of communal life. They created the first communal palace, and the first civic square, in Italy. Venice was perhaps also the first city in Europe to benefit from what has been called city-planning, with the deliberate “zoning” of industries and activities along the peripheries of the city. All this was part of the search for the common good. The battle against natural obstacles is the battle for human culture and improvement. It requires immense cohesion, and a social discipline that is best reinforced by religious observance. So emerges the concept of the state as divinely inspired.

Yet we must not discount the character and temperament of these early settlers. Their work was hard and continual, and could not have been carried on successfully without large measures of energy and optimism. These are, or were, the distinctive qualities of the Venetian people. They are, or were, proud of their city. It was one of the characteristics noted by travellers. Yet nature sometimes retaliates against those who attempt to curb it. Certain islands of the lagoon were submerged by the encroaching sea; settlements disappeared or were abandoned. There was always, somewhere in the Venetian soul, the threat of punishment and disaster.
Posted by Mitch Williamson at Thursday, October 04, 2012