BOMARZO: THE ART OF MELANCHOLY 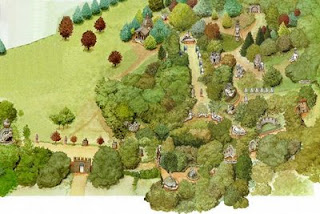 Bomarzo, the most instantly recognizable of Italian gardens, is also the most untypical – indeed it is unique and impossible to categorize. Its weird monsters, giants, gaping mouths and lopsided architecture would seem more at home in the paintings of Salvador Dali or the pages of H.P. Lovecraft than in the peaceful countryside of the Latium. Located near Viterbo, the palace of Bomarzo, at the town of the same name, belonged to the Orsini family, and the garden was created by one of its most eccentric members, Vicino Orsini. Born in about 1516, Vicino grew into a colourful and talented young man who sired a number of illegitimate children before marrying in 1544 the beautiful noblewoman Guilia Farnese. He had a distinguished diplomatic and military career before being captured in battle in 1553 by the forces of the Habsburg Emperor Charles V and held to ransom for three years. Orazio Farnese, his closest friend, was killed in the same battle, and shortly after he was freed from imprisonment his beloved young bride also died. In his grief he became a recluse and began obsessively to build one of the world’s most bizarre gardens.

Why did he create such an extraordinary place? The explanation may have something to do with his friend Cristoforo Madruzzo, a brilliant, worldly aristocrat and Church potentate who lived not far away in the palace of Bagnaia at the town of Soriano. Hansmartin Decker-Hauff, in an essay on Bomarzo, speculates that the two men entered into a kind of competition: Cristoforo Madruzzo set out to create at Bagnaia a garden of beauty, harmony and light, while Vicino Orsini at Bomarzo created one of gloom, disharmony and weirdness, reflecting his melancholy state of mind. However, I would suggest that the explanation is perhaps more complex. There are two opposite approaches to dealing with the condition of melancholy. One is to attempt to banish the melancholy by subjecting oneself to cheerful stimuli. The other is to do the opposite, namely to surround oneself with sad and gloomy things, thus giving oneself a kind of homeopathic dose of melancholy to stimulate a counter-reaction. As an example of the latter approach, the writer Colin Wilson has described how, as a young man, when he returned home from a tedious day’s work feeling depressed, he would retire to his bedroom and read the gloomiest poetry he could find. Inevitably, after a while he would begin to cheer up and be able to put the gloomy reading aside. This method was surely known to the Renaissance, and would provide a convincing explanation for Vicino’s creation of the Bomarzo garden.

It has also been claimed that the figures at Bomarzo, most of them carved out of natural pieces of rock on the site, are alchemical images. Vicino was deeply interested in alchemy and corresponded with the French alchemist Jean Drouet, and certainly a number of the figures could be given an alchemical interpretation. Others, however, appear to have no obvious connection with alchemy.

Probably the most penetrating and detailed study of Bomarzo and its creator is Horst Bredekamp’s Vicino Orsini und der heilige Wald von Bomarzo (Vicino Orisini and the Sacred Wood of Bomarzo), illustrated with wonderfully evocative photographs by Wolfram Janzer. Bredekamp sees much of the meaning of Bomarzo as lying in Vicino’s Epicurean world view, which led him to seek solace in sensual pleasure and the joys of nature and to rebel against the Counter- Reformation orthodoxy of his day by plunging into an extravagant world of the imagination, full of weird and bizarre images. Bredekamp also explains many of the features of Bomarzo as being intended to commemorate Guilia Farnese.

An interesting fictional treatment of Vicino’s life, written in the form of an autobiography and clearly based on thorough research, is the novel Bomarzo by the Argentinian writer Manuel Mujica Lainez. As Lainez portrays him, Vicino created the garden as a kind of inner portrait of himself, a ‘book in stone’, deliberately enigmatic. Writing of the rocks before they were carved, he says: ‘Each rock contained an enigma in its structure, and each of these enigmas was also a secret of my past and my character. I only had to uncover them, to strip each rock of the crust that covered its essential image.’

The approach to the garden of Bomarzo takes one first past two sphinxes, which underline the mysterious nature of what the visitor is about to see. An inscription on one of them reads:

(You who enter this place, observe it piece by piece and tell me afterwards whether so many marvels were created for deception or purely for art.)

Here the word ‘art’ could possibly be taken to mean the alchemical art.

Passing between the sphinxes the visitor comes to a small house, built deliberately so that it leans disconcertingly to one side. Bredekamp sees this as one of the memorials to Guilia Farnese. The pictorial source for the house he identifies as a contemporary emblem book by Achille Bocchi, where a similar leaning building signifies ‘a woman who, with great steadfastness during her husband’s absence at war, preserves the family house from collapse’. More strange images follow: a huge scowling face with a gaping mouth leading to a cave (perhaps the most famous of Bomarzo’s features), an androygne (possibly an alchemical image) being held upside down and ripped apart by a giant, a mermaid with two tails (again an image found in many alchemical treatises), a dragon attacking a deer, a giant tortoise carrying a globe surmounted by a female figure with a trumpet, and numerous other marvels.

Possibly the creation of the garden served many purposes – part memorial to Vicino’s deceased wife, part therapy for melancholy, part autobiography in stone, part collection of alchemical symbols, part mannerist experiment. The sculptures lay forgotten for centuries, gathering moss, until in the twentieth century they began to attract the attention of art historians, artists and writers. The writer Manuel Mujica Lainez has already been mentioned. The artists that the garden has inspired include Niki de Saint Phalle and the Spanish surrealist Salvador Dali, who incorporated some of its images into his paintings and who was once photographed holding a candle and talking to a white cat in the jaws of Bomarzo’s largest monster. The spectacle perhaps drew a wry smile from the ghost of Vicino Orsini.