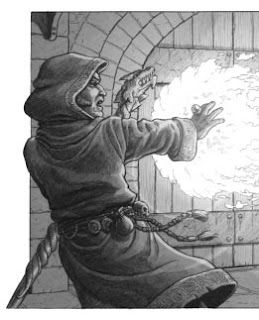 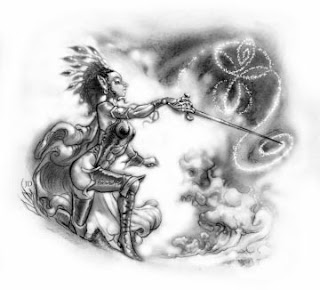 At the most fundamental level, magic is a form of universal energy. This energy is frequently known as mana and is simultaneously subtle and potent. Mana itself simply is. To an individual who can manipulate mana, magic becomes the power to bend and reshape reality.

Wielding mana is essentially a three-step process. The mana is first concentrated in a person, an object, or even a place. Then a pattern, encapsulating the desired change in reality, is imposed upon the mana. Finally the mana is released, propagating the pattern through and out of the mana, affecting the alteration in the real world, while the mana relaxes from order to chaos.

Many techniques exist both to concentrate mana and to form the patterns. These are the disparate magical traditions of the world; rare indeed are the sages who have mastered more than two or three of these lores. Yet despite their diversity, all styles of magic are united in drawing upon the same mana.

THE PREMISES OF MAGIC

Magic is mana, and mana is a form of energy. It suffuses and pervades the entire universe. Yet despite its omnipresence, mana itself is difficult to perceive except by individuals who are innately gifted or specially trained to sense it. The overt manifestations of mana manipulations are, however, readily observable.

The theoreticians of magic speculate that there are actually at least two universes superimposed on each other - a mundane universe and a magical universe. They claim that mana percolates through the infinitesimal interstices of the cosmos, eternally circulating between the magical and the mundane. Just as mundane matter and energy can neither be created nor destroyed, only changed in form, so it is with mana. It can be gathered, it can be temporarily ordered, and it can be released, but the quantity of mana in the universe neither increases nor decreases.

MAGIC AND THE PLANES

One popular theory describes the entire cosmos as a series of enclosing hollow shells such that each shell is a “plane of existence” (or “universe”). At the center of the multiverse and between each plane is an “ethereal” layer. The ethereal layers combine to form the magical universe, and all other planes are connected by the various portions of the ethereal plane.

The innermost shell is considered to be the mundane universe or “Mortal Plane”. The next “nearest” plane is an “Astral Plane” which to some extent reflects the mortal plane. Every sentient being, every animal, and every plant of the mortal plane has a measure of “life force”. On the astral plane, this “life force” casts a bright “shadow”. Some savants, particularly shamans, are even able to transfer their consciousness (temporarily or otherwise) to the Astral Plane and can observe the mundane plane from this enlightened vantage.

“Beyond” (in some sense) the Astral Plane is the Elemental Plane. This seems to be actually four subplanes, one for each of the four primal elements (see later) of Air, Earth, Fire and Water. These subplanes are believed to be the true home of the Elementals.

“Further out”, there are planes of alternate realities where the “natural laws” of physics, chemistry, and biology have assumed different configurations. More “distant” still are the “Outer Planes”, which are home to Demons, Devils, and perhaps the gods themselves.

The theorists agree that there are multiple planes of existence and that the Ethereal Plane connects all the planes. The majority believe that mana is the glue that binds the multiverse together. But there is as yet no consensus on how the “planes” are ordered or even on suitable analogies to describe the phenomena.

MAGIC AND THE ELEMENTS

The sages further conjecture that everything material that exists in the mundane universe also exists at a primal elemental level in the magical universe. (This reflection may be limited to one layer of the Ethereal Plane.) According to these theories, the magical universe consists of a substance known as the “Primal Essence”. Different aspects of Primal Essence can manifest in various ways - the most well-known are the four pure Elemental Essences of Air, Earth, Fire, and Water. The elemental subplanes are areas of the multiverse where these normally transcendental essences are the predominant form of matter.

In some sense, Primal Essence and the Elemental Essences both reflect and underpin ordinary matter as its magical foundation. Indeed, they are considered to be mana in its material form, and that heightened concentrations of these essences may be responsible for certain materials being better able to focus and retain mana. However wild these speculations may seem, the specialist magicians known as Elementalists apparently tap into the Elemental Essences to create their magical effects.

“Primal Essence”, or at least a material which mages name as such, is occasionally found in meteorites and other objects that fall from the skies. This highly magical material is thought to spontaneously appear in the gulfs between the stars. Similarly concentrations of pure Elemental Essences seem to appear in certain locations of the Mundane Plane (i.e. Water in the ocean depths, Fire in the heart of volcanoes, Earth within otherwise pure seams of precious metals, and Air in the center of great storms.) Elemental spell casting frequently involves the creation of these essences on the Mundane Plane.