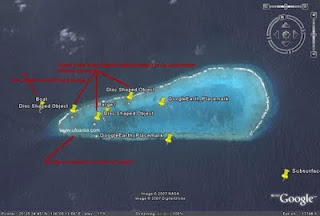 The Bermuda Triangle’s infamous association with disappearing boats and aircraft is known across the globe. Less well known is an area off the west coast of Japan which has an equally deadly history. It is an area where Japanese sailors fear to voyage; they call it ‘Ma-no Uni’ – the ‘Sea of the Devil’. Legend has it that huge restless dragons surface from their deep shelters to seize any unfortunate passing mariners. Japanese sailors have often recorded freakish occurrences in the area and talk of hearing terrible noises and seeing awful red lights. They believe one particularly potent creature lives in an immense palace beneath the waves. They call this monster ‘Li-Lung’, the ‘Dragon King of the Western Sea’, and say his lair is decorated with the ships he has captured.
This mysterious zone stretches from western Japan to Yap Island in the south and Taiwan to the west. Like the Bermuda Triangle, it is seen as having an above average number of navigation and communication failures. In truth, this area of ocean bears a remarkable resemblance to its Western cousin. Both areas are known for extreme changes in weather conditions, unexpected fogs, tidal waves, seaquakes and hurricanes, and both have examples of agonic lines, lines upon which a compass needle will point true north and south. Their most unwelcome similarities are the truly horrifying levels of unexplained sinkings and disappearances.
By the late 1940s, the amount of ships being lost without trace in the region lead to the Japanese government declaring the area a danger zone. In the early 1950s they decided to dispatch a research vessel to study the area. Despite enjoying good visibility and calm seas, the Kiao Maru No.5 disappeared without trace on 24th September 1952. The lives of all twenty-two crew and nine scientists were lost. The vessel has never been found. It has only been in relatively recent years that these incidents of strange disappearances have been reported in the West. To the Japanese, they are regular occurrences which stretch back for centuries and continue to this day. Whether it is dragons or not, the real evidence behind this ocean’s terrible secret remains on the seabed.
Posted by Mitch Williamson at Wednesday, September 09, 2009