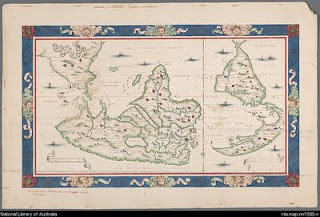 A reproduction of a 1566 world map by Nicolas Desliens. With south orientated at the top, the top left corner has a large land mass that is claimed to be Australia, charted from Chinese voyages.

Speculation that Chinese seamen discovered a south land at the beginning of the 15th century is based on the large-scale military and trading expeditions into the Indian Ocean, commanded by Zheng-He, which extended to Sri Lanka in 1406; to Calicut, on the Malabar Coast, in 1407; to Hormuz and Aden 1413 through 1415; and to the east coast of Africa in 1417. These voyages are well documented in Chinese records and confirm that Chinese fleets possessed an oceangoing capacity. Significantly, the records relate that of 700 ships that sailed for Sri Lanka in 1406, only 620 reached port there. Some ships were lost in a storm, others are reported to have broken away from the fleet and sailed southward.

The discovery in Beijing in 1932 of an early map, dated 1426, including a representation of the south land, which bears little apparent resemblance to Australia but that was remarkably similar to European maps of this early period, suggests that the Chinese had certain knowledge of the configuration of Australia and the Pacific Ocean.

Early-14th-century Chinese coins and pottery, uncovered in Western Australia, Tasmania, and New South Wales, have also been cited as evidence of early Chinese contact with Australia, possibly by the ships that had been diverted south on the 1406 voyage and that had reached Western Australia, sailed to Tasmania, and then continued up the east coast of the continent. Additionally, the name of the township, Nimbin, in northern New South Wales, occurs in Chinese records. Opposing theories consider Nimbin to derive from either a legendary Aborigine hero or to translate from an Aborigine term denoting a little hairy man.

A figurine of a man clothed in a long flowing robe, sitting astride an antelope, found lodged in the roots of a banyan tree near Darwin in 1879, seemingly provided further evidence of an early Chinese presence in Australia. Almost 50 years later, this was identified as a medieval jade figure of Shou Lao, a Taoist divine. From its position when found, it was deemed unlikely that it had been dropped or planted in modern times and had, in fact, been deliberately placed there. Moreover, Taoism had always remained a distinctively Chinese religion confined to China. So, the argument ran, it was probably conveyed to Australia in a Chinese ship.

Alas, late-20th-century opinion was that the figurine belonged not to the medieval period but to the early 19th century and was thus discredited as supporting evidence of a Chinese discovery of Australia a good century before the earliest European contact. But that was not the end of the story. Principally based on the author’s detailed scrutiny and interpretation of early Portuguese maritime cartography, and also on his own knowledge and experience of navigation, Gavin Menzies’s 1421: The Year China Discovered the World (2002) threatens to revolutionize the study of overseas discovery and exploration.

Early in March 1421, so the story runs, a huge armada set off from Beijing. Comprising 250 gigantic, 9-masted junks, each divided into 16 internal watertight compartments, accompanied by 400 grain-transporting freighters and escorted by squadrons of fast and maneuverable warships, this unprecedentedly powerful armada had two main aims. First, to return the kings and envoys who had attended the inauguration of China’s new capital, The Walled City, in Beijing and, second, to create a vast maritime trading empire widening across the oceans of the world.

In recognition of his long service to China’s overseas trade, the supreme command of this imposing manifestation of Chinese maritime power was given to Zheng-He. At sea, anchored off Sumatra, his command was divided into four separate fleets. Two, under Hong Bao and Zhou Man, Menzies contends, discovered Australia.