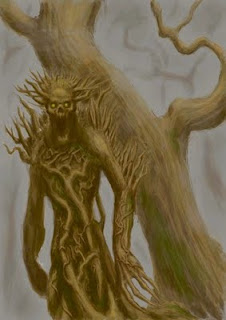 The Russians call a silvan spirit Lešiy, Lesovik (cf. Russian lesu, "forest, wood"), and such a being shows himself either in human or in animal guise. When he appears in the former shape, he is an old man with long hair and beard, with flashing green eyes, and with his body covered by a thick coat of hair. His stature depends on the height of the tree, etc., which he inhabits: in the forests he may attain the size of high trees; in the fields he is no taller than grass. In the woods the Lešiye frequently appear to travelers as ordinary people or as their friends; but at other times they take the shapes of bears, wolves, hares, etc. They live in deep woods and in fields; forests, fields, and meadows are the realm over which they rule. Usually there is only one Lešiy in each wood; but if there are several, a "silvan czar" is their lord. Some Lešiye remain alone by themselves in forest solitudes and in caves, while others are fond of society and build in the woods spacious dwellings where they live with their wives and children.


The principal business of the silvan spirits is to guard the forest. They do not allow people to whistle or to shout there; they drive away thieves, frightening them by their cries and playing pranks upon them. The deer and the birds enjoy their protection; but their favorite is the bear, with whom they feast and revel.


When the Lešiy walks through the forest to look after his property, a rustling of the trees accompanies him; he roams through the woods, rocks upon the boughs, whistles, laughs, claps his hands, cracks his whip, neighs like a horse, lows like a cow, barks like a dog, and mews like a cat. The echo is his work; and since a strong wind constantly blows around him, no man has ever seen his footsteps either in sand or in snow.


He is of a mocking and teasing disposition, and is fond of misleading those who have lost their way, removing boundary stones and signposts, or taking the shape of a wanderer's friend to confuse him and lure him into thickets and morasses. He also entices girls and children into his copses, where he keeps them until, long afterward, they escape with their honor lost; and he likewise substitutes his own offspring for human children, such a changeling being ugly, stupid, and voracious, but strong as a horse. If a man suddenly falls ill while in the forest, he believes that this affliction has been sent upon him by the Lešiy; to recover his health he wraps a slice of salted bread in linen and lays it in the woods as a present for the silvan spirit.


Shepherds and huntsmen gain the Lešiy's favor by presents. The former make him an offering in the shape of a cow and thus secure his protection for their flocks; while the latter place a piece of salted bread on the stump of a tree and leave for him the first game which they take. Moreover, the recitation of certain formulae secures his services, and there are many ways to obviate the danger of being led astray by him as by turning one's garments inside out, putting the right shoe on the left foot, bending down to look between one's legs, etc.


Nymphs and dryads likewise show themselves in the woods, and are pictured as beautiful girls, wearing a white or green gown, and with golden or green hair. In the evening, when stillness reigns in nature, they divert themselves by dancing and singing; and they also dance at noon, when it is dangerous to approach their circles, since they dance or tickle to death those who allow themselves to be attracted by their songs. They are most perilous to young lads, whereas they often feel pity for girls and richly reward them.


The dryads punish children who shout in the woods while gathering mushrooms; but, on the other hand, if they are courteously asked, they show where these fungi grow in abundance The forest where they live usually contains a magic well whose waters cure all diseases. Sometimes they marry country lads, but they will not permit themselves to be insulted or reminded of their descent.


Woods and mountains are the home of "Wild Women" (Bohemian Divoženky, Lusatian Džiwje Žony, Polish Dziwozony, Sluveoian Divje Devojke, Bulgarian Divi-te Leni), good-looking: beings with large square heads, long, thick hair (ruddy. or black in color), hairy bodies, and long fingers. They lived in underground burrows and had houseluo; is like mankind. They either gathered ears in the fields or picked them from the sheaves, and having ground the grain on a stone, they baked bread which spread its odor throughout the wood. Besides bread they ate the root of the liquorices and caught game and fish. They were fond of combing hemp, which they wove into frocks and shirts.


The "Wild Women" knew the secret forces of nature, and from plants and roots they prepared unguents with which they anointed themselves, thus becoming light and invisible. They were fond of music and singing; and storms were believed to be caused by their wild frolicking. Lads and lasses were invited to dance with them and afterward reaped rich rewards. They maintained a friendly intercourse with human beings, frequently entering their villages and borrowing kneading-troughs and other necessaries. Those who did not forget to reserve some dish for them were well repaid, for the "Wild Women" kept their houses in order, swept their rooms and courtyards, cleared their firesides of ashes, and took care of their children; in the fields they reaped the corn, and gathering up the grain, tied it Into sheaves; for the women they not only spun hemp, but also gave them crops that never diminished. Many stories are told about their marriages with country lads. They were model wives and housekeepers, but they vanished if any one called them "Wild Women," and untidy firesides or dirty kneading-troughs were also apt to drive them away.


They were dangerous to any person, whom they might meet alone in the forest, turning him round and round until he lost his way. They lay in wait especially for women who had just become mothers and substituted their own offspring for the human children, these changelings, called Divous ("Wild Brats") or Premien ("Changelings"), being ugly, squalling, and unshapely. The "Wild Women" did much harm to avaricious and greedy persons, dragging their corn along fields, bewitching their cows, acid afflicting their children with whooping-cough, or even killing them. It was during Midsummer Night that they were most powerful.


The Lusatian Serbs believe that the Džiwje Žony ("Wild Women") are white beings who reveal themselves at noon or at evening. They like to spin hemp; and if a girl spins or combs it for them, they reward her by leaves that become gold.


In Polish superstition the Dziwožony are superhuman females with cold and callous hearts and filled with passionate sensuality. They are tall in stature, their faces are thin, and their hair is long and disheveled. They fling their breasts over their shoulders, since otherwise they would be hindered in running; and their garments are always disarranged. Groups of them go about woods and fields, and if they chance upon human beings, they tickle the adults to death, but take the young folk with them to be their lovers and playmates. For this reason young people never go to the woods alone, but only in groups. In the belief of the Slovenians the Divje Devojke, or Dekle, dwell in the forests; at harvest-time they come down to the fields to reap the corn, and the "Wild Men" bind it into sheaves, the farmers' wives bringing them food in return. Where they came from no one can tell, and the cracking of whips has driven them away at last. The Divja Žena is a woman of tall figure, with an enormously large head and long black hair, but very short feet; site dwells in mountain caves. If a woman does not nurse her child properly, the "Wild Woman" comes and either substitutes a changeling for it or carries it away.

The Bulgarian Diva-ta Žena lives in the woods anti is covered with a thick coat of hair; she throws her long breasts over her shoulders and thus nurses her children. She is strong and savage, and her enunciation is defective.


More rarely mention is made of "Wild Men." They live in forests, and their entire bodies are covered with hair or moss, while a tuft of ferns adorns their heads. If they catch a young girl, they take her to wife; and if she runs away from them, they tear her child to pieces. They appear to lonely wanderers and, accompanied by terrible gusts of wind, they frighten them and lead them into morasses. The "Wild Men" like to tease gamekeepers and forest-rangers by imitating the hewing, sawing, and felling of trees; and they chase deer in the woods, hooting horribly all the while. In Slovenian tradition the Divji Mož ("Wild Man") lived in a deep forest cave and was possessed of terrible strength. The peasants of tie neighborhood who wished to avoid being harmed by him had to carry food to the cottage that was nearest his cave; but he was well disposed toward the peasants who cooked their meals in his hut and advised them how to set to work.


Besides these silvan spirits there are similar beings of various names. The ancient Czechs were familiar with Jeze and Jezenky ("Lamias"), who were said to have the faces of women, the bodies of sows, and the legs of horses, People still believe in Jezinky who, living in caves, put out the eyes of human beings after lulling them to sleep, and who kidnap small children, whom they feed on dainty morsels, in their caverns. The ancient Poles, too, knew of them and still tell stories of Jendzyna, who figures in popular fairy-tales as Jaga-baba, Ježibaba, Jendžibaba, etc.


In Moravia the "Wild Beings" are small and ungainly, live in fields, and may transform themselves into all sorts of animals. Since their own children are ugly, they steal those of mankind and treat them very well; but the changelings whom they foist on human beings are hideous and bald, with huge heads and stomachs; they neither grow nor talk, but eat a great deal, whining and whimpering constantly. The Slovaks have their Zruty, or Ozruti, who are wild and gigantic beings, living in the wildernesses of the Tatra Mountains.