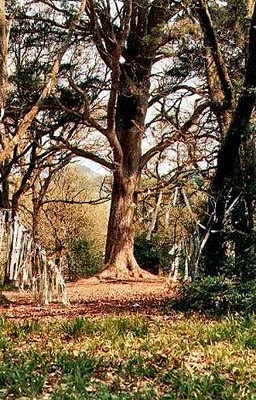 
Cosmological concept. The Celts arranged the most familiar and valuable TREES of their lands into a series that had mystical meaning and could be used for DIVINATION. These formed the OGHAM alphabet, each letter of which was named for a tree. The ogham letters were drawn using a system of horizontal and diagonal lines; the letters and sounds these symbols stood for are represented below, along with the tree that each letter was linked with. The sound of each letter is the same as the initial sound of the tree’s Irish name.


This alphabet has been the source of some controversy, with some scholars dismissing its importance, while others stress it. It was not used as our alphabet is, as a means of transcribing literary works and other compositions for later reading, but rather as a divinatory tool and as a means of memorizing.