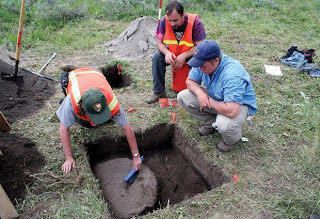 Elaine Hale, Yellowstone National Park archaeologist, helps Montana-Yellowstone Archaeological Project students Andrew Bowen of Kent State University and Ryan Sherburne of the University of Montana excavate a feature at the Fishing Bridge Point Site. The large volcanic boulder was likely used as a table or work area about 3,000 years ago. 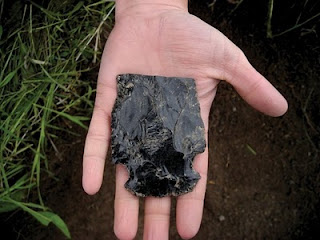 This large obsidian point was found near Lake Lodge in Yellowstone National Park in 2009. It’s 150 percent bigger than other spear points of the time, prompting researchers to believe it was used for ceremonial purposes.


Thousands of years before Euro-Americans “discovered” the bubbling mudpots and eruptive geysers of what is now Yellowstone National Park, early Americans were spending part of their summer camping in the Yellowstone Lake area.

“It’s always been a destination resort,” said Elaine Hale, park archaeologist. “For at least 10,000 years people have been using the lake area.”

Thanks to archaeological digs around Yellowstone Lake last summer by University of Montana assistant archaeology professor Douglas MacDonald and 13 graduate and undergrad students, park officials are now getting a broader picture of early human use of the lake area.

“The lake may have served as a crossroads of sorts for Native Americans from multiple regions,” MacDonald said.

Obsidian, a valued rock used to create razor-sharp points for weapons and tools, is located about 20 miles to the northwest at Obsidian Cliff. The lake area contains a variety of flora – everything from camas to wild onions – that would have created a great stew or to create medicines. And there was plenty of wildlife in the region. One archaeological site turned up blood residue from bear, wolf and deer as well as rabbit sinew.
“The lake area was clearly an important warm-weather hunting and gathering grounds for Native Americans from all over the northwestern Great Plains, northern Great Basin and northern Rocky Mountains,” MacDonald said.

His group’s explorations are part of the university’s Montana-Yellowstone Archaeological Project, which is now entering its fourth year. The partnership offers students the opportunity to perform field work while Yellowstone receives inexpensive research help.

This past summer, MacDonald’s crew made some unique finds. Along the northeast shore, the crew uncovered the park’s first Early Archaic hearth, dating to 5,800 years ago.

“The feature indicates that Native Americans used the park during the hot and dry altithermal climate period,” MacDonald said.

The Altithermal Period followed the last ice age, after large mammals like woolly mammoths had become extinct. Yellowstone Lake, during that time, would have been a huge oasis drawing people, and wildlife, from throughout the region.

*****
Hale said analysis of campsites showed some visitors could have been small parties of male hunters, while others were families staying for longer periods.

“There are sites along the lake where there was extensive processing of hides,” Hale said. “We found sites where freshly quarried obsidian cobble had been transported to the area. This is a lithic workshop area.”
Another campsite was littered with about a dozen shaft abraders, used to smooth arrows and spears.
“That smacks of duration,” Hale said.

Another unique find was a large obsidian spear point. MacDonald theorized that the point was created for ceremonial purposes, since it’s 150 percent larger than other spear points of the same time.

The point was shaped in the style of the Hopewell Culture of about 1,500 years ago. The Hopewell Culture is known for being one of the first in North America to lead a more sedentary life that included farming, and metal working, and created burial mounds along the Mississippi and Ohio river valleys. They also traded extensively.

“It is well known that Obsidian Cliff obsidian was traded eastward to the Ohio and Mississippi river valleys,” MacDonald said. “Some archaeologists also speculate that Hopewell Native Americans themselves actually traveled to Obsidian Cliff to collect obsidian.

“Our large spear point was likely a ceremonial item, as was much of the obsidian for Hopewell people,” he said. “Most of the obsidian at sites back east is found within burial contexts.”

The UM research also indicates that “most Native Americans using the northern end of the lake traded and traveled primarily to the north, east and west, rather than to the south,” MacDonald said. “Other work at sites along the south shore of the lake indicated that Native Americans in that area were focused more southward.”
So there seemed to be some reason, possibly a cultural one, for why the people traveling from the south into the lake area didn’t move farther north.

“It just so happens that Yellowstone Lake is at the edge of multiple different tribal territories,” MacDonald said.

MacDonald and a crew of 22 graduate and undergraduate students will continue their work in the park this summer, their fourth year, surveying other parts of the lake’s shore. By identifying important cultural resource sites, park officials can plan any development to exclude and protect those areas, Hale said. Four of the five sites uncovered last summer are being considered for listing on the National Register of Historic Places.