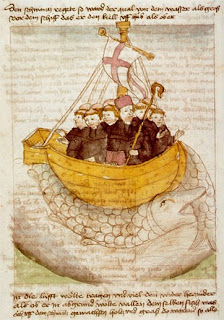 St Brendan and the whale from a 15th century manuscript
For centuries the legend of an Irish monk named Brendan (also called Brenainn, Brandan, or Borodan) circulated among explorers and navigators of late Middle Ages Europe. Some historians speculate that Christopher Columbus might have relied on maps with St. Brendan’s Isle on it, located somewhere in the Atlantic off to the far west. Others say that the 10th-century Hiberno-Latin romance called the Voyage of Brendan might have been on Columbus’s reading list before he did his travels to the New World. The life of Brendan is mostly based on legends and secondhand reports. Thus, it is difficult to state with confidence many of the facts of his life. He was a native Irishman, born at a time when Celtic Christianity was beginning to flourish as the Roman Empire receded. His mother supposedly was Ita, an Irish saint, in County Kerry on the west coast. He was educated by Irish saints and ordained by a famous Irish bishop around the year 512 c.e. Then he began his vocation as an explorer and missionary in Ireland and Scotland and the hinterlands of western Europe.
According to legend he founded many monasteries and achieved a high place in the honor roll of Celtic spirituality, which values its heroes on the basis of supernatural feats and sanctity. One of his monasteries was Cluain Fearta in Clonfert (559 c.e.), which reportedly had 3,000 members. His own home monastery was on Mt. Brandon, Ireland’s second highest peak, which today shows a ruined oratory and cells for monks.
Consistent with Celtic spirituality Brendan devised his own discipline and structure for his monasteries. He called his monks to a life of missionizing, seafaring, and exploring, an ideal for which the Irish were already known. One of the ancient Hiberno-Latin chroniclers, Adamnan (c. 10th century), corroborates this adventuresome spirit when he writes that Brendan was a fellow crew-member with Columba of Iona who sailed to the “Isles of the Blessed”—perhaps the Danish Faeroe Islands or Iceland. He is also mentioned in an ancient church litany of St. Aengus the Culdee (eighth century) as sailing with some (perhaps dozens) of his fellow monks.
The account mentioned above, Voyage of St. Brendan, is a travel adventure story like Sinbad the Sailor or the Odyssey. Historians have collected many such Irish tales and suggest that Voyage is a deliberate Christian imitation of the Virgil’s great travel adventure, the Aeneid. Most likely Voyage was originally written to teach Irish monks about discipline and monastic ideals but soon was translated into the European vernacular languages and read for entertainment.
The natural trajectory of his travels following winds and currents may well have landed Brendan in Canadian Newfoundland 1,000 years before Columbus. The types of adventures that the Voyage describes can easily be situated in the North Atlantic and in the New World. The trip was replicated in modern times with a boat built in Celtic fashion. Even more recently claims have been made that Celtic symbols and alphabetical characters were found in the New World farther south in New Hampshire, Vermont, and even West Virginia.
Further reading: Adam, David. Desert in the Ocean: The Spiritual Journey According to St. Brendan. Mahwah, NJ: Paulist Press, 2000; Severin, Tim. The Brendan Voyage. New York: Modern Library, 2000.
Posted by Mitch Williamson at Tuesday, May 04, 2010