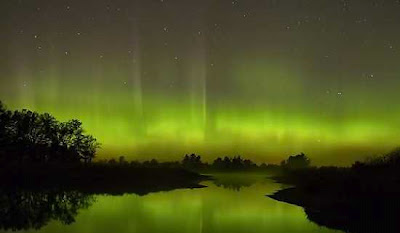 A coronal mass ejection (CME) is a massive burst of solar wind. They are often associated with other forms of solar activity, most notably solar flares. A solar flare is a sudden brightening observed over the Sun, which has been interpreted as a large release of energy. The flare ejects clouds of electrons, ions and atoms through the corona into space. These clouds typically reach the earth a day or two after the event. Most ejections originate from active regions on the Sun’s surface, such as sunspots. During the solar maximum, which is the time when the Sun shows the greatest amount of activity, the Sun produces about 3 CMEs every day, whereas near solar minimum there is about 1 CME every 5 days.

The next solar maximum is predicted to occur sometime between January and May 2013. When a coronal mass ejection is directed towards the Earth, the wave of particles can create a geomagnetic storm that may disrupt the magnetosphere. The process can cause strong auroras around the Earth’s magnetic poles, known as the Northern and Southern Lights. Coronal mass ejections and solar flares can disrupt communication lines, radio transmissions, and cause damage to satellites and electrical transmission facilities, resulting in massive and long-lasting power outages on Earth. Humans in space or at high altitudes, in airplanes for example, risk exposure to intense radiation.

The solar storm of 1859 occurred during solar cycle 10. It was the most powerful solar storm in recorded history. The largest flare, observed by Richard Christopher Carrington, became known as the Carrington Super Flare. On 1 September 1859, Carrington and Richard Hodgson, another English amateur astronomer, independently made the first published observations of a solar flare. It should be noted that Scottish physicist Balfour Stewart recorded a super flare on the evening of 28 August 1859, at the Kew Observatory, and presented his findings in a paper on 21 November 1861. Despite this fact, Richard Carrington has been given the designation of being the first to demonstrate the existence of solar flares.

In 1859, the largest flare was caused by a coronal mass ejection directed toward Earth. The CME took only 18 hours to arrive. This is remarkable because such a journey normally takes three to four days. On 1–2 September 1859, the Earth experienced a huge geomagnetic storm. Auroras were seen around the world, most notably over the Caribbean and Rocky Mountain. In the wake of the storm, telegraph systems all over Europe and North America failed. Telegraph pylons threw sparks and paper spontaneously caught fire. Some telegraph systems appeared to continue to send and receive messages despite having been disconnected from their power supplies. A similar event in 2013 could devastate the world’s infrastructure.
Posted by Mitch Williamson at Wednesday, July 18, 2012