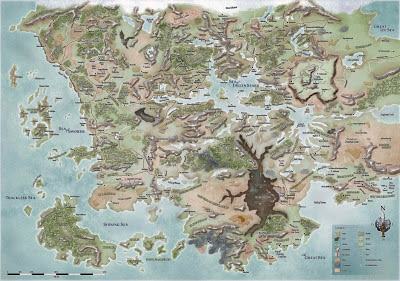 Faerûn includes terrain that is as varied as that of Europe, western Asia, and much of Africa is on our planet Earth. Role-playing campaigns in Faerûn can be set in a wide variety of locations, each with its own hazards and potential rewards for the participants. Likewise, the region that the players explore can determine what types of monsters they will face, which famous individuals they will encounter, and what types of missions they assume.

Besides the exterior coastline to the west and south, the most dominant feature on the continent is the Sea of Fallen Stars. This is an irregular inland sea that keeps the neighboring lands fertile and serves as a major trade route for the bordering nations. Next in significance is the Shaar, a broad region of grasslands in the south that, together with a large body of water called the Lake of Steam, separates the area around the inland sea from the coastal nations at the southern edge of the continent. To the east, Faerûn is bordered by a vast region of steppe that separates it from Kara-Tur. In the north are massive glaciers, named Pelvuria and Reghed, and a region of tundra. South of the continent, separated by the Great Sea, is a sub-tropical land called Zakhara.