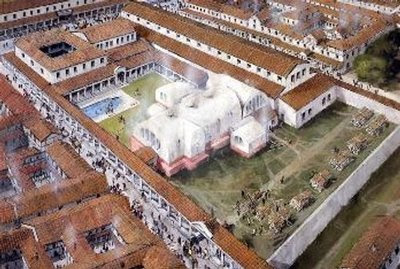 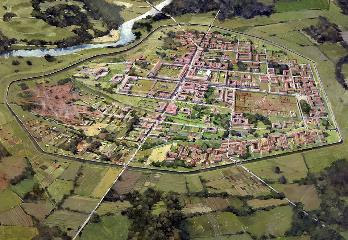 Wroxeter (or 'Viroconium' ) was the fourth largest city in Roman Britain. It began as a legionary fortress and later developed into a thriving civilian city, populated by retired soldiers and traders. Though much still remains below ground, today the most impressive features are the 2nd-century municipal baths, and the remains of the huge wall dividing them from the exercise hall in the heart of the city. The site museum and audio tour reveal how Wroxeter worked in its heyday, and the health and beauty practices of its 5,000 citizens. Dramatic archaeological discoveries provide a glimpse of the last years of the Roman city, and its possible conversion into the headquarters of a 5th-century British or Irish warlord.


In the early 2nd century CE, Viroconium (modern-day Wroxeter, in Shropshire) was the fourth biggest city in Roman Britain. Although it subsequently fell into decline, archaeological evidence suggests that it was reoccupied and heavily restored and fortified during the 480s, exactly the time when Arthur was said to be at large. In their book, King Arthur – the True Story, Graham Phillips and Martin Keatman propose that Viroconium was Camelot, and that the Arthur who dwelt there was the Welsh king Owain Ddantgwyn (‘Owen White Tooth’).

Owain ruled the kingdoms of Rhôs and Gwynedd at the end of the 5th century. He was killed by his nephew Maelgwyn in a battle at Camlan, while Arthur was killed by his nephew Mordred at Camlann. Owain’s father was known as the ‘Terrible Head Dragon’ because he was the pre-eminent British leader, or Dragon, of the period. In Welsh, this translates as Yrthyr pen- Dragon, and Arthur’s father was said to be Uther Pendragon. In addition, some sources refer to Owain’s son as ‘Son of the Bear’, indicating that Owain may have been known as ‘the Bear’ – which, in both Welsh and Latin, translates roughly as ‘Arthur’. In fact, the first ever mention of Arthur comes in a poem attributed to Owain’s tribe, the Gododdin.

In other words there is lots of evidence suggesting that Owain was the historical basis for Arthur. An engraved stone, dated to 480 CE, found at Viroconium records that the city was occupied by a king of the Cunedda family – Owain’s family. Was this king in fact Owain ‘the Bear’ himself, making Viroconium his Camelot?

Arthurian writer Mick Baker points out that of the major cities of post-Roman Britain, only Viroconium shows signs of rebuilding and fortification in the late 5th century, suggesting that it could have become the de facto national capital during this crucial ‘Arthurian’ period: a Camelot in all but name.