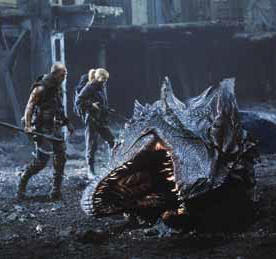 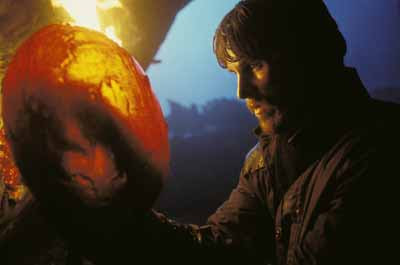 Note: This article originally appeared in issue 18 of the Prague Pill.

Dragons – not nukes – and the end of the world.

Reign of Fire is Mad Max by way of Dungeons & Dragons. Not Dungeons & Dragons the disgraceful kid movie released two years ago, but the original role-playing game. D&D: the ultimate symbol of smart-guy disenfranchisement. An evergreen punch line that calls to mind a particular breed of teen nerdboy spending his weekends rolling for damage. And Mad Max: second only to The Blood of Heroes on the list of best post-apocalypse movies, and one of the few movies with a sequel as good as its predecessor. Clearly, director Rob Bowman and his scriptwriters respect both the fantasy and post-apoc genres.

The high concept is thus: What if dragons are real and were reawakened in the modern world? The film opens when a construction team punches into an uncharted cavern deep beneath the streets of London. Quinn, the scrappy son of the forewoman, is on hand and asks to hop into the hole to investigate the dank, creepy HR Giger-inspired chamber. Inside: an honest-to-god, fire-breathing dragon. Quinn’s mother dies in this first dragon encounter, with a good portion of humanity soon to follow.

Twenty years later, dragons rule the earth, and Quinn (Christian Bale) leads a small group of survivors who have turned an old castle into a stronghold. In a nearby valley, they carefully cultivate food, with Quinn trying desperately to convince his starving community not to harvest too soon. Do not feed from the crop until the seeds are mature enough, else we will all starve to death next season, he warns. They are ever watching the sky, and have no hope but to outlast the dragons as they deplete their own food supply, i.e., humanity.

In some movies, you shouldn’t see the bad guys because it’s a letdown. Signs fell apart completely when the mysterious aliens appeared early as lanky men in green leotards. Or take the 1998 Godzilla remake. Almost every monster scene was jittery, dark and rainy because it’s quicker and easier and therefore cheaper to render the computer-generated effects with less detail; somehow, the new American Godzilla was no more realistic than the original Japenese guy in a rubber suit. The Reign of Fire dragons are not hidden in twilight; they are full-frame, day and night. They are as beautifully rendered and as concrete as the best dinosaurs in Jurassic Park.

They’re also bad-ass. These are not fat-bellied, bulky majestics, tossing riddles and verse to frightened hobbits. They are not regal and magical. They are lean and swift omnivores – fire-breathing locusts that feed on death. They killed the dinosaurs by burning them and eating the ash. They soon rendered the planet barren and starved themselves. The strongest went into hibernation.

Once awakened, the small brood reproduce like insects and spread across the globe, consuming everything in their path. The fall of mankind is told by magazine clippings from Quinn’s scrapbook. The first sightings were treated like UFOs, but soon cities were in ruin. The Eiffel Tower and Big Ben are shown swarmed by dragons like bats fluttering around a gothic cathedral. They are the ultimate plague.

Enter the foil: Matthew McConaughey as Van Zan, a brusque, arrogant, cigar-chomping American rough rider, come to British soil to track down the granddaddy of all dragons. He rolls up in a tank with a unit of commandoes and a talent for dragon slaying. The pumped McConaughey – known first for Dazed and Confused and more recently for being arrested naked in his house for playing the bongos a bit too loudly – is pure America. He’s the would-be hero who shows up without being invited, determined to rescue the locals and save the world. Van Zan and his team are heading to London to slay the only male of the species, or so they think.

It's really the dragons that are most interesting about this game. All the while players are defending or chasing dragons, they're circling and firing at characters. They appear in several forms. The smallest of them are called Jackals, and they are wingless little creatures resembling Raptors. Apparently, as the dragons grow in size, they evolve from land-based creatures to massive winged beasts, which doesn't make too much sense because there are larger land-based dragons than some of the flying ones. The second land-based character is a massive, fledgling, fire-breathing dragon that quickly crawls around and breaths deadly fire on gamers. There is a small, quick airborne dragon as well as a massive, monster vulture attacker as well. Players will find variations on all of them as they progress through the game, and all are well modeled and textured.

On the other hand, the dragon levels are more fun to play. They control relatively well, with a bit of a learning curve, and they revolve around destroying a whole lot of stuff. Dragons deliver straight lines of fire for closer range attacks or they spout out long-distance fireball attacks. Dragons can also pick up human vehicles, which is a blast. They pick them up and drop them, a tactic around which a few levels are built. The dragon levels are undoubtedly more fun, yet still not explosively great -- just moderately good entertainment.