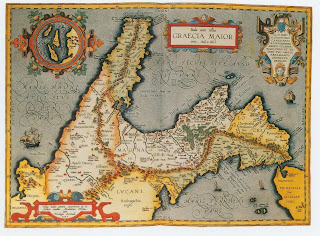 Abraham Ortelius, in Parergon, Antwerp, 1595
Osher Collection, University of Southern Maine
This map, oriented with east at the top, shows the ancient Greek seaport colonies in southern Italy, known as Magna Graecia. Major cities included Tarentum, Croton and Heraclea. The latter was the site of the famous battle in which Pyrrhus, king of Epirus, sustained devastating losses in defeating the Romans, giving rise to the term "Pyrrhic victory."
Posted by Mitch Williamson at Monday, March 16, 2009