THE DEATH OF JOHN PAUL I PART I 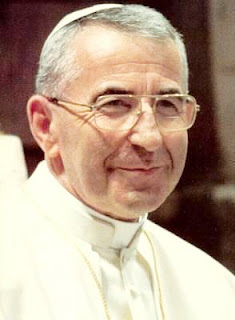 Albino Luciani was elected pope on 26 August 1978, taking the name John Paul, and died just 33 days later after one of the shortest reigns in papal history. Immensely popular during his short office, the ‘Smiling Pope’, as he was known for his accessible approach and lack of airs and graces, might also have proved to be one of the most radical and influential figures of the 20th century, had he lived. In stark contrast to popes previous and subsequent, John Paul I was considering relaxing the Church’s hard line on contraception and is widely believed to have favoured a programme of liberal reform within the Vatican. Given the potential influence of the Church on Catholics around the world, such a change of direction could have had profound consequences for social and religious issues on a global scale. His untimely death set history on a very different path. To understand why, it is necessary to examine the complex state of Vatican politics prior to his election.

During the 19th and 20th centuries there had been a considerable debate within the Church between liberal and conservative factions, and the forces of reactionary, right-wing Catholicism had gone to considerable lengths to crush their opponents. In the 19th century the Vatican had used its intelligence networks to spy on and discredit liberal thinkers, while the Vatican of the 1920s was accused of being excessively cosy with Mussolini and his Fascists. Some anti-Catholic writers accuse Pius XI of colluding with the Fascist takeover of Italy in return for huge sums of cash and the Lateran Treaty of 1929, which formally recognised the Vatican City as an independent state over which the pope and the Curia had sovereignty.

During the council known as Vatican II, which sat from 1962 to 1965, the clash between liberal and conservative factions came to a head. Thanks in large part to the efforts of John XXIII, Vatican II liberalised many aspects of Church practice and made it possible for progressive critics within the Church to speak out. The traditionalist old guard of the Curia were dismayed, and intense battles continued over issues such as birth control. John XXIII’s successor, Paul VI, vacillated on the topic, eventually coming down on the conservative side. As it turned out, Cardinal Luciani had been one of the voices urging him to adopt a more liberal stance.

Apparently the traditionalists did not realise this, for when Paul VI died and the supporters and opponents of Vatican II locked horns in the papal election, they were happy to accept Luciani as a compromise candidate. He was almost unique in not having had a Curial or diplomatic career, and thus seemed to stand apart from the factional politics of the Vatican. He also seemed to have little ideological baggage, famously being only a ‘simple’ priest who considered himself unworthy for high office. Presumably the right-wing old guard expected him to be at least neutral, and possibly easily led. They were soon to discover their mistake.

Not long after his coronation the new pope met with UN representatives to discuss population issues and sparked a furore by giving a speech in which he admitted considering changes to the Vatican’s hard line on contraception. Conservative elements in the Curia took the extraordinary step of censoring the pope’s own comments in the pages of the official Vatican newspaper. There was also talk that John Paul I (Luciani) was considering reforms affecting the Church at every level, which must have been particularly disturbing to rightwing Catholics given that he was considered ‘soft’ on communism and that his father had been a committed socialist.

But what was most alarming to the entrenched traditionalists who ran the Curia, according to conspiracy theorists, was the new pontiff’s investigation into the murky waters of Vatican finances. It was in this sphere that the unholy Italian alliance of P2, the Mafia and the Church had borne fruit with financial misdeeds on an epic scale.

One consequence of the Lateran Treaty was that the Istituto per le Opere Religiose or IOR, the Institute of Religious Works, commonly known as the Vatican Bank, was free from the usual oversight and regulation that affected other financial institutions. This naturally made it the perfect vehicle for money laundering, and it is widely believed that it became profoundly tangled up in a web of dirty money. The finger is particularly pointed at P2, which supposedly used its unique network of mafioso, bankers and financiers, and high-ranking Vatican officials to link the IOR with a flood of dirty money from drug dealing, racketeering etc via a number of suspect private banks. According to one theory, the Bank’s major involvement in money laundering came when a change in the law in Italy meant that the Vatican’s massive share portfolio would come under public scrutiny. Fearing embarrassment if the size of their holdings became public, the Vatican Bank decided to divest itself of the shares. Gelli introduced them to Italian banker Roberto Calvi, head of Mafia-linked Banco Ambrosiano, who offered to buy the portfolio in return for huge sums of dirty money thus laundering the ill-gotten funds.

Whether or not this scenario is true, it is certain that the Vatican Bank, and in particular its American branch under Archbishop Paul Marcinkus, was heavily involved with Mafia money laundering and sinister financiers such as Calvi and Sicilian banker Michele Sindona. Also implicated was the Vatican Secretary of State Cardinal Villot, the head of the Curia, an arch-conservative painted by many conspiracy theorists as the arch-villain of the papal murder mystery.

This then, was the cabal of right-wing interests ranged against the new pope. According to the conspiracy theory of his death, most clearly and convincingly articulated in David Yallop’s book, In God’s Name, John Paul I had quickly perceived the rot at the heart of the Vatican, analysed a complex mass of documents and identified the key culprits – in particular, he had become aware of the startling level of P2 membership among leading figures in the Vatican. These men would be relieved of their responsibilities and moved to harmless positions, and the work of cleaning house could begin. On the night of his murder he supposedly took to bed with him a sheaf of vital documents relating to the Vatican Bank and its financial shenanigans.

On the morning of 29 September 1978, the body of Pope John Paul I was discovered by the papal secretary, John Magee, sitting up in his bed. He had died of a heart attack. This, at least, was the official story. In fact it later came out that the body had been discovered much earlier than originally said, by a nun called Sister Vicenza who was a papal housekeeper. There were also discrepancies over the treatment of the body, which was immediately removed for embalming, making a post-mortem impossible. This was in violation of Italian law but not, the Curia argued, of Vatican law, which specifically prohibited a post-mortem. In fact this was not true either – a post-mortem had been carried out on the body of Pope Pius VIII in 1830 Even after the embalming process there should have been blood and organs available for testing, but these had mysteriously vanished. So too, according to conspiracy theorists, had the documents the pope had been reading, his glasses and even his will.

What would a post-mortem have discovered? According to conspiracy theorists, it would have shown that John Paul I was poisoned; that he had been murdered, by Villot acting in league with P2 and the crooked bankers, with the tacit support of all those who feared the pope’s liberal agenda. There is, however, a different view, best encapsulated by John Cornwell’s book, A Thief in the Night. According to this view Pope John Paul I was not the sharp witted detective hero of Yallop’s scenario, but an intellectual lightweight who was not equal to the task of being pontiff and whose poor health, coupled with the notoriously poor medical care offered by the Vatican, meant that his sudden death was no mystery.

There is plenty of evidence to back up this alternative version. During his short tenure John Paul I repeatedly complained that he should not have been picked and visitors commented on his loneliness and isolation. On one occasion he caused consternation by dropping a file of top-secret documents over a wall onto Vatican rooftops. His health was known to be poor and he suffered from serious cardiovascular problems. He had previously suffered a minor embolism (where a blood clot blocks a blood vessel) and showed symptoms of a much more serious one on the night of his death, but had ignored suggestions that a doctor should be called in. Health care in the Vatican was notoriously bad: the previous pope, Paul VI, had practically been killed by a charlatan who later took photos of his corpse. The embalming of Paul VI had also been an embarrassing disaster – the body had rotted so fast that its nose fell off when it was lying in state. Perhaps the Vatican had rushed to embalm John Paul I to avoid a similarly distasteful disaster on one of the hottest days of the year. As for the ‘stolen’ documents from the papal bedroom – it later turned out that they were safely in the possession of his sister’s family.