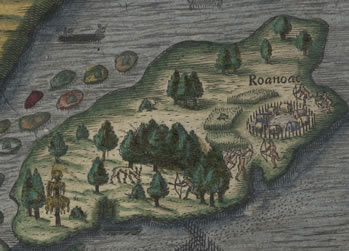 Theories about the Lost Colony

The most obvious explanation is that the Lost Colonists were never found because they were dead. They could have been killed by hostile Native Americans or starved to death. Both are plausible. The first attempt at colonising Roanoke Island failed to feed itself adequately, while the Jamestown colony 20 years later came perilously close to starvation. Perhaps the Lost Colonists simply ran out of food and were not familiar enough with local agricultural or foraging to cope. This explanation seems much more probable since the publication of a 1998 study on tree rings from old growth trees in the area. Conducted by the Tree-Ring Laboratory of the University of Arkansas’ Department of Geography, the study showed that 1587–1590 saw the region’s worst period of drought in the 800 years from 1185–1984.

If starvation had killed the colonists in Roanoke, however, White would probably have found the remains of the colonists on the site, and the colony itself would not have been carefully dismantled and stripped of most of its portable equipment. If the settlers did starve, they evidently didn’t do it on Roanoke Island.

The drought finding also increases the probability that the colonists came into conflict with their neighbours. At a time of extreme scarcity the indigenous peoples would have been less generous and more jealous of their scanty resources, and much more likely to take issue with newcomers attempting to take, steal or extort food, as the previous Roanoke colonists had tried to do. Although the Croatan Indians were friendly (when White left, at any rate), the other local tribes were not. This period also saw migrations and wars between Native American nations in the area, perhaps triggered or exacerbated by the drought.

The fact that the colonists had built a palisade in White’s absence could be interpreted to mean that they felt threatened – in fact we know they did, because this is one of the reasons White was sent back to England to drum up support. But such construction was probably routine for settlers, and again there was no evidence on site of battle or slaughter. It is conceivable that there was a siege scenario and the menfolk were picked off one by one as they ventured out of the palisade in an increasingly desperate search for food, eventually leaving only the women and children. They could have then been captured by the Native Americans and assimilated into the tribe, as was the custom, but there is no evidence to support this.

The most widely accepted explanation for the fate of the colonists is that they were killed by Native Americans, but only after leaving Roanoke Island. The primary source to back this up is Captain John Smith of the Jamestown colony. He had dealings with the hostile Native American King Powhatan (father of Pocahontas) and was specifically told by him that a group of white men had settled amongst friendly Chesapeake Indians on the south side of Chesapeake Bay – where they had originally intended to found the ‘Cittie of Raleigh’ before being dumped on Roanoke. Feeling increasingly threatened by the incursions of white men into his territories, and also hostile to the Chesapeake Indians who were not part of his confederacy, Powhatan had launched an attack and claimed to have killed most or all of the white men. He backed up his claim by producing for Smith’s inspection ‘a musket barrell and a brass mortar, and certain pieces of iron that had been theirs’.

This may not be the end of the story, however, as there is a lot of evidence that some colonists were assimilated into a Native American tribe in the Roanoke area, possibly because they did not join the group who went to Chesapeake Bay. The most probable candidates are the Croatan Indians. The colonists had good relations with them, and in particular with their chief, Manteo, who had previously travelled to England and become a firm ally of the English. Plus, of course, this location is suggested by the colonists’ final message, ‘CROATOAN’. It is now thought likely that some of the colonists stayed behind on Roanoke and later joined up with the Croatans on Hatteras Island, leaving the message for White to find, but that the collective was then forced to move to the mainland by the drought. The settlers and the Croatans then intermarried and eventually became known by a different name.

Some of the strongest evidence for this scenario is the tale of the Lumbee Indians of North Carolina. In the 19th century it was widely put about that the Lumbee were indeed descendants of the Lost Colony, and it was argued that their accents, appearance and many of their names clearly indicated this. Since then, this idea has gone in and out of fashion. Some anthropologists have argued that the 19th-century attribution was based on confused interpretation of the actual Lumbee ethnogenesis, which saw them migrate from the Roanoke area in the 18th century, and that Lumbee names do not resemble those of the Lost Colonists. More recently a DNA testing project has been launched to compare the Y chromosomes of Lumbee who share surnames with English people who might be descendants of the families who sent colonists to Roanoke. The whole issue is complicated by questions of race and segregation, for in the Lumbee area of North Carolina there was strict segregation until the Civil Rights era, and claiming mixed or white descent had important implications for personal and political treatment.

This by no means exhausts the theories about the fate of the Lost Colony. The Mary Celeste-style disappearance of the colonists has lent itself to some whacky theories involving alien abduction. More plausible theories centre on the role the Spanish might have played. There was an established Spanish colony at San Augustin (now St Augustine) in Florida, and they were keen to stamp out English presence in the New World. In fact they did just this to other attempted colonies.

It is now known that the Augustin colonists did hear about the Roanoke colony and that the Spanish did send out an expedition to reconnoitre and possibly destroy, but that when they arrived at Roanoke in June 1588, the colony was already gone. In other words it had survived in situ for less than a year.

In her book Roanoke: Solving the Mystery of the Lost Colony, Lee Miller argues that there is more behind the disappearance of the colonists than bad luck and poor planning. She asserts that the colony was deliberately sabotaged by Sir Francis Walsingham, chief of Elizabeth’s intelligence network and Raleigh’s enemy at court, who coveted the patent to exploit Virginia himself.

Miller claims that the account of a seaman who sailed with Fernandez’s fleet carrying the White colonists, but was put ashore in the Caribbean before they reached North America, clearly shows that it was always Fernandez’s intention to leave them on Roanoke and not transport them further to more promising regions. Supposedly he did this because he was in the pay of Walsingham, who had saved him from the gallows some years earlier. Miller further suggests that Walsingham also connived to block White and Raleigh’s attempts to launch resupply/search expeditions.

In 1937 the story of the Lost Colony took an intriguing twist when a stone was found in a swamp, 100 kilometres (60 miles) west of Roanoke Island. The Eleanor Dare Stone, as it was soon dubbed, bore carvings which, when deciphered, seemed to indicate that it was a message from Eleanor Dare (daughter of John White and mother of Virginia Dare), explaining to her father that the colonists had fled from Roanoke Island under attack from Native Americans. Over the next three years 40 more stones were discovered, apparently tracing the colonists’ epic journey from Carolina to Georgia. The stones created a media sensation but were revealed in 1940 to be an elaborate hoax.

If the theory that at least some of the Lost Colonists joined up with the Croatan Indians and then moved to the mainland is correct, is it possible to discover the location of this new settlement and thus to finally say for sure what happened to the Lost Colonists? A team of researchers called the Lost Colony Center for Science and Research (LCCSR) think that it is. They have used a mixture of old and new techniques to attempt to locate and excavate the sites that the colonists might have occupied or passed through.

Their first major coup was identifying the site of the original Croatan settlement on what was then Hatteras Island. Excavations revealed a late-16th-century signet ring that probably, to judge from the design of the crest on the seal, belonged to one of the original Roanoke colonists (ie the Lane party). This proved that the Croatan Indians of this site had had contact with the Roanoke settlers at some point.

The researchers then turned to the hypothesis that the Lost Colonists and the Croatans joined up and moved inland, with a particular focus on John White’s comment that the agreed plan had been to move ‘50 miles into the maine’. By looking at old land deeds they uncovered evidence that seemed to show that a group of descendants of Croatan Indians had owned land at a site called Gum Neck – precisely 80 kilometres (50 miles) inland from Roanoke Island, and one of the few sites suitable for settlement in an area that was previously swampy. The LCCSR now hopes to use aerial imaging and satellite photography to precisely locate the remains of a colonial-era settlement of some sort in or around Gum Neck.

For the moment the theories regarding the relocation of the Lost Colonists to Chesapeake Bay and mainland North Carolina are unproven. But they fit with the available evidence, and in particular with the suggestive tales of encounters with apparent European descendants in the area. Archaeological research, guided by remote-sensing technology such as airborne radar and magnetometer scanning, may eventually pinpoint the exact location, but not everyone is so keen to solve the mystery. Phil Evans – who helped to found the First Colony Foundation, a group of historians and archaeologists who are looking on Roanoke itself for the precise site of the Lost Colony, which has been lost through neglect and the shifting sands of the area – comments, ‘As long as the Lost Colony is unexplained, it stays fascinating for a lot of people … I don’t want to take away the mystery. That’s what makes it different and exciting.’

On a less jolly note, however, there are suspicions about the motivations behind the effort to prove that the Lost Colonists intermarried with Native Americans and left descendants. In a racially fraught region it raises disturbing issues of ethnicity, and for some reflects a distasteful urge to create an artificial colonial–native legacy that might somehow undermine native claims. The Lost Colony is not simply a historical mystery; it is also the first act in the long and often tragic drama of colonial America.