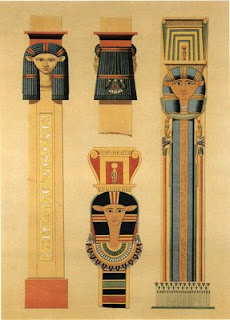 In temples and chapels dedicated to Hathor, columns were often crowned with a likeness of the goddess. The columns, used from the New Kingdom to the Roman period, evolved in style during the centuries. Left, the column bears the names of Amenophis III and Hathor, and possibly originates from the same chapel as the lost column in from Karnak. The crack in the stone indicates that it was found broken in two. The column center is from a painting in a Theban tomb, and the Hathor column right is from the Ptolemaic temple of Deir el-Medina