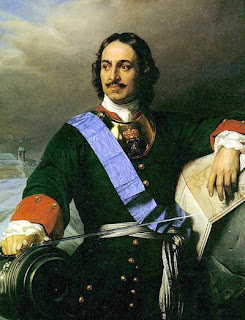 Peter I (1672–1725), was the tsar who made Russia a Great Power and a military force to be reckoned with, starting the long, painful process of westernising and modernising the country. He was successful enough to be called ‘the Great’. One of the key episodes of his reign was the Grand Embassy of 1697–1698, during which the Tsar travelled incognito.

As a youth growing up in Russia, Peter had spent much time in and around the enclave where the European traders and workers were based. Here he had learnt much about the ‘advanced’ science and technology of the West, especially his favourite topic shipbuilding, and had grown accustomed to the informality of life among the Europeans. This was in stark contrast to the regimented life he was expected to lead as tsar.

In 1694 Peter attained full control of the country and immediately started a limited programme of shipbuilding. He also launched campaigns against the Ottoman Turks to the south, in an attempt to secure access to the sea for his then landlocked country. After early reverses, Peter’s drive and ingenuity won through, but the Russian military was weak and old-fashioned and eventually these gains had to be surrendered. His experiences against the Turks probably helped to convince Peter that Russia desperately needed Western technology, innovation and support if she was to become a significant power.

In 1697 Peter organised a delegation of 250 Russian officials and some of their European advisors to tour a number of European countries. It was to be known as the Grand Embassy. Led by one of Peter’s best friends, Admiral Francois Lefort, a Swiss, the group would travel to the West to try and win support for a Grand Alliance against the Turks and also to see for themselves, first-hand, some of the latest European science, technologies and industry. Such a delegation was not unheard of, but unusually Peter decided to join the Embassy himself. Even more unusually, he would travel incognito, under the name Sergeant Peter Michailov. To address him by his true name or title was punishable by death.

In practice it was hard for Peter to travel incognito, partly because he was six feet seven inches tall. Probably everyone in the Embassy knew who he was and he often attracted large crowds as he and his companions travelled. Undaunted, Peter arranged for members of the delegation, including himself, to get work at some of the shipwrights’ yards they visited. Peter worked for four months as a ship’s carpenter at the Dutch East India Company’s yard in Saardam, in the Netherlands, and later at the Royal Navy dockyard in Deptford when the Embassy visited England. He and other delegates visited factories and observatories, the Royal Mint and the Royal Society. Peter inspected ships and troops, visited Parliament and met with Quakers for informal religious discussions.

It was this informality that marked his visit, and helped him to engage with people from a variety of backgrounds. Although in political terms the Embassy was a failure (European countries were more concerned with matters closer to home and had no interest in an alliance against the Turks), Peter’s skill at learning from his surroundings meant that it was a cultural, technical and economic success. Many Europeans were engaged to come back to Russia, to work and to train other Russians. Their impact helped Peter modernise Russia’s outdated military institutions, create a formidable navy from scratch and bring Russia onto the world stage for the first time. He may have failed in his bid to remain incognito, but his ‘undercover’ policy helped begin the transformation of Russia.