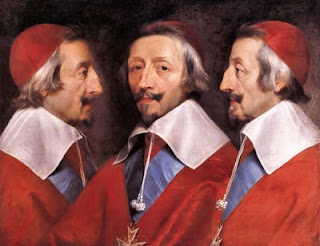 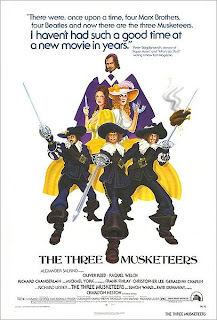 The name of Cardinal Richelieu, prime minister of France under Louis XIII, has become synonymous with the figure, ‘the power behind the throne’. Thanks mainly to Alexandre Dumas’ The Three Musketeers, and its subsequent film adaptations, the image of Cardinal Richelieu held by most people today is of a cynical, corrupt old man, hungry for power for its own sake. Perhaps his most famous quote is: ‘If you give me six lines written by the most honest man, I will find something in them to hang him.’ But what is the truth about this enigmatic figure?

He was born Armand-Jean du Plessis, the third son of the lord of Richelieu, the ancestral estate. Originally he intended to pursue a career in the military, but when his older brother resigned the family bishopric of Luçon, Armand changed his professional direction. He studied theology and was made bishop at just 21. Here his career should have stopped. The Richelieux were a minor noble family, and Luçon a minor provincial diocese. Yet he rose to become the effective ruler of France and one of the most important statesmen in French history.

Richelieu was both ambitious and talented. He worked hard to make a success of the Luçon diocese and spoke well in the states-general, the French equivalent of Parliament. To his growing reputation as a capable administrator he allied political savvy, becoming known as a dévot, a staunch Catholic with pro-Spanish views. Handily this was also the faction of the French regent Marie de Medici, who ruled France in the minority of her son, Louis XIII.

Richelieu came to court in 1615 and soon caught the eye of Marie’s favourite, Concini, who recognised his talents and had him appointed secretary of state for war and foreign affairs. His star was rising, but in 1617 it seemed likely to be extinguished. Concini was assassinated by rivals jealous of his power and that of the regency, and Richelieu was forced to follow Marie into exile in the country. For years he languished in the political wilderness, but after Marie’s escape from her imprisonment he was instrumental in negotiating a reconciliation between Louis and his mother, and in 1622 was rewarded by being made a cardinal. At this time Louis was seeking a new chief minister, and with Marie’s recommendation he chose Richelieu, making him prime minister in August 1624.

Once in a position of power, Richelieu spent the rest of his career relentlessly pursuing his philosophy of proper governance. The power of the king, who embodied France, was all-important, and all other considerations were secondary to the welfare of the state. Richelieu was a firm believer that the end justified the means; he insisted that ‘harshness towards individuals who flout the laws and commands of the state is for the public good; no greater crime against the public interest is possible than to show leniency to those who violate it’. This philosophy essentially made him a nationalist, since he vigorously opposed anything that detracted from the interests of France and the crown. It also made him numerous enemies at every level, from the aristocrats to the peasantry.

To enforce this ruthless pragmatism Richelieu used means fair and foul. He defeated the strong French Protestant faction, the Huguenots, and reduced their stronghold at La Rochelle. He tore down the castles and fortresses of regional princes and nobles to weaken their ability to oppose the crown. He changed his foreign policy to the opposite of his previous dévot stance, making alliances with Protestant nations against Catholic Spain and Austria. For this he earned the enmity of the queen mother. Domestically he replaced the corrupt system of government administration with intendants – agents of the crown. He also instituted an extensive network of spies and informers.

Thanks to these spies he was able to defeat the constant stream of conspiracies aimed at him by disgruntled aristocrats, including Marie de Medici. He had several rivals executed. In general, the king was happy to let Richelieu rule the country in his stead, but in later life the cardinal grew worried that he might lose influence and attempted to bolster his position by introducing an attractive young man to the court. As Richelieu hoped, Henri Coiffier de Ruzé, marquis de Cinq-Mars, became Louis’ lover and favourite. Expecting to be able to control Cinq-Mars as his puppet, Richelieu was dismayed to find that the marquis was actually trying to turn Louis against him, urging the king to have him executed. Richelieu was not to be beaten at his own game, however, and it was Cinq-Mars who lost his head.

Richelieu’s influence on the king held up from beyond the grave. As he felt the icy hand of death approaching, he picked Cardinal Mazarin as his successor and Louis acquiesced. When Louis died in ...., just six months after Richelieu had passed away, his will stipulated that the regents who watched over his infant son must follow Richelieu’s disposition for the governance of France, and Mazarin governed as prime minister for many years, continuing his predecessor’s policies.

Richelieu had ruled France from behind the throne for 18 years, and as he neared death was able to write to his king: ‘I have the consolation of leaving your kingdom in the highest degree of glory and of reputation.’ Although he was a schemer and a plotter, he was not motivated by the pursuit of power for its own sake, only for the sake of France: ‘I have never had any [enemies], other than those of the state.’