TOMBS OF THE NECROPOLIS OF MEMPHIS (SAQQARA CEMETERY-5TH DYNASTY) [SIC] 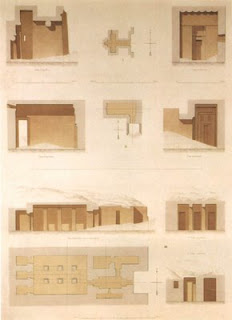 Architectural reconstructions of offering chapels from three tombs in Saqqara are presented here; the extensive wall decorations have been left out. From left the first and third are Old Kingdom chapels, and are, respectively, the chapel of Sabu and the large chapel of Ra'shepses, chief justice and vizier during the reign of Isesi. Both monuments are located just north of the Step Pyramid at Saqqara. The second probably represents a chapel from the Middle Kingdom, one which lies next to the pyramid of King Teti. It belonged to Ihy, overseer of the royal stalls, who lived around 1900 B.C. The reconstructions are based on the work of Lepsius.