CARYATID PILLARS OF THE TEMPLE OF RAMESSES 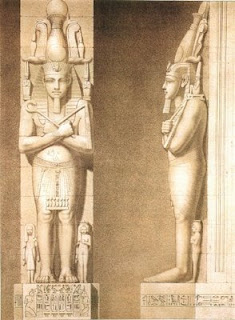 The temple of Medinet Habu in western Thebes was the mortuary temple for Ramesses III. In the first court of the building, seven pillars—the Osirid Pillars—stand in a row, with a statue of the king attached to each. (Strictly speaking, this is not a caryatid pillar—a supporting pillar carved in the shape of a human figure. These figures are attached to a. square pillar which supports the roof.) The statues were badly damaged when the temple was converted into a church. To execute this study, Prisse collected various surviving parts from the seven statues and reconstructed one in its entirety. It shows the king with all the emblems of royal power. The god Amun, sitting on his shoulders, symbolizes "beloved of Amun."