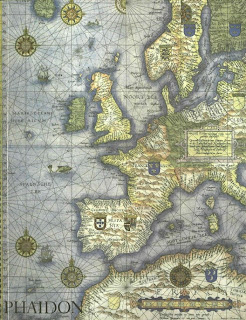 Lucas Janszoon Waghenaer, Chart of Europe, Leyden, 1586. Chart from the first engraved sea atlas, the Spiegel der Zeevaerdt. Originally published in 1584 in Dutch, there were many editions of the atlas in different languages until 1615.

It would be tempting at this stage to launch into a chapter on the 'Age of Discovery' but we must content ourselves with only a passing reference to the influence of Henry the Navigator and the voyages of the Portuguese southwards down the coast of Africa and subsequently to India, to those of Columbus to the West Indies, of Cabral to Brazil, Cabot to Labrador and to Magellan's circumnavigation of the world, and to the long controversies over the merits and possibilities of the North-West and North-East passages to the Orient. Suffice it to say that in rather less than a century knowledge of the geography of the world changed profoundly, a change which was reflected in the gradual abandonment of the Ptolemaic ideas which appeared in the early printed editions of the Geographia from 1477 onwards. Furthermore, from about the year 1500, the development of improved geometrical methods of survey and the invention of more precise instruments by geographers in Germany and the Netherlands enabled relatively large land areas to be surveyed more rapidly and accurately and, on a wider scale, Gerard Mercator, regarded as the greatest name in cartography since Ptolemy, produced the first map on his new projection in 1569. Publication of Ptolemy's maps continued during the century under many names including Waldseemüller, Miinster and Gastaldi; successive editions contained an increasing number of 'modern' maps until, in 1570, the Ortelius Theatrum Orbis Terrarum, composed entirely of contemporary maps, was published in Antwerp. This Atlas, containing at first about 70 maps, was an immediate success and publication continued through 40 or more editions until 1612, but it was not the only success story of the time. There was extraordinary activity in every facet of map making: Mercator's Atlas in three parts was printed in Amsterdam between 1585 and 1595; also printed there in 1584 was the first Atlas of engraved sea charts De Spiegel der Zeevaerdt by Waghenaer with an English edition in London in 1588 and many editions in other languages; in the Rhineland, there was the superb collection of over 500 town plans in 6 volumes compiled by Braun and Hogenberg, published between 1572 and 1618; and, not least, Christopher Saxton's survey of England and Wales was being carried out soon after 1570 followed by publication of his Atlas in 1579 which set a standard unsurpassed for the best part of two centuries.