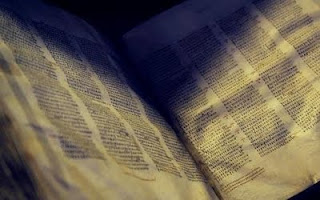 The Codex Sinaiticus, which appears to date from about AD350, is handwritten in Greek on animal skin and is the earliest known version of the Bible.


A fragment of the world's oldest Bible, the Codex Sinaiticus, has been uncovered hidden underneath the binding of an 18th-century book in an Egyptian monastery.

The discovery was made by a British-based Greek academic, Nikolas Sarris, who is studying for his PhD in Britain, after he noticed a previously unseen section of the bible.
The 30 year-old student conservator, who has been involved in the British library’s project to digitise the Codex, said he almost instantly noticed the distinct Greek lettering as he was recently researching in the library of St Catherine's Monastery in Egypt.

The Codex Sinaiticus, which appears to date from about AD350, is handwritten in Greek on animal skin and is the earliest known version of the Bible.

Leaves from the tome are divided between four institutions, including St Catherine's Monastery and the British Library, which has the largest section of the ancient Bible since the Soviet Union sold its collection to Britain in 1933.
Last year The British Library put The Book of Psalms and St Mark's Gospel online, and now the remaining pages have been made free for public use for the first time.

Along with the Codex Vaticanus, the Codex Sinaiticus is considered the oldest known Bible in the world.

Originally more than 1,460 pages long and measuring 16in by 14in, it was written by a number of hands around the time of Constantine the Great.

Mr Sarris said it was an exciting moment when he realised what he had discovered.

“Although it is not my area of expertise, I had helped with the online project so the Codex had been heavily imprinted in my memory,” he told said from the Greek island of Patmos.

“I began checking the height of the letters and the columns and quickly realised we were looking at an unseen part of the Codex.”

Mr Sarris said he then emailed Father Justin, the monastery's librarian, to suggest a closer look at the book binding.

"Even if there is a one-in-a-million possibility that it could be a Sinaiticus fragment that has escaped our attention, I thought it would be best to say it rather than dismiss it,” he told The Independent.

Speaking to The Art Newspaper, Father Justin said the monastery would use scanners to look more closely at how much of the fragment existed under the newer book binding.

"Modern technology should allow us to examine the binding in a non-invasive manner," he said.