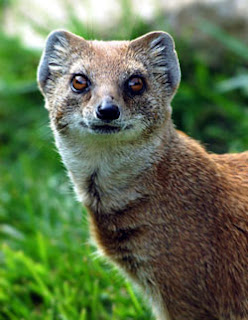 Your Fabulous Singing Mongoose - Cobras beware, who a mongoose dare.

WHEN IS A GHOST not a ghost? When it is a talking mongoose! In 1931 the Irving family started hearing strange sounds coming from the attic and walls of their farm in Dalby on the Isle of Man. James Irving, his wife Margaret and their daughter Voirrey were sure a large animal was scampering around the house out of sight. The noises it made were so loud, plates fall and hanging pictures moved. Over time, it began making bizarre hissing and crying sounds. James Irving decided to make animal noises at it, and, to his astonishment, the creature started doing these impressions back at him.


He decided to teach the beast a few words, and within weeks the creature could speak perfectly. It said its name was Gef, and it was a mongoose born on 7th June 1852 in Delhi, India. Gef refused to appear in front of the Irvings, and was known to be quite rude. When the Irvings threatened to leave him, he calmed down. The family and the mongoose grew close, and he even let them stroke him through a hole in the wall.


Eventually, the story of Gef spread, although when reporters came from the mainland, many were unimpressed with the phenomenon. They believed it was actually Voirrey who was creating the voice. In 1937 the Irvings sold the farm and were believed to have taken Gef with them. However, in 1947, the new owner claimed to have shot a strange, mongoose-like animal outside the house.


The idea of a mongoose in the Isle of Man is not quite as bizarre as it first appears. In 1912 a local farmer did import a group of the animals to kill rabbits on his land. However, most present-day researchers believe if Gef was anything, then he was probably a poltergeist. But there is one last interesting fact; in India they have a strange old legend. They say that over time, and with the right teacher, the mongoose can learn to speak.