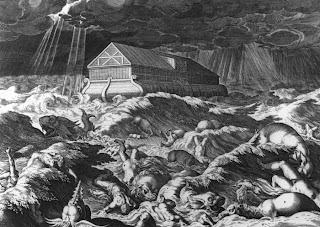 JESUS CHRIST himself referred to ‘The Flood’ but it is not only Christians who believe in the story. Jews believe in accounts of the disaster described in the Holy Torah whilst Muslims have references in the Koran. The first historical record of the disaster appeared in eighteenth century BC Babylonian writings, whilst the ancient Epic of Gilgamesh is also concerned with a great flood. ‘Flood’ traditions and references exist in 300 different cultures around the world; Ancient Greeks, Romans and Native Americans all have fables of a terrible flood that left only a few survivors. There are suggestions that the Noah flood may have been the same event that destroyed Atlantis. Although tradition and mythology has often represented strong circumstantial evidence, recent provable scientific knowledge has been crucial in helping to support the ‘Great Flood’ theory.


The scientific approach began in the 1990s when two geologists from Columbia University, William Ryan and Walter Pitman, pieced together clues that they believed suggested a great ancient flood actually did occur. Ryan and Pitman formulated a theory which proposed that the European ice sheets melted about 7,500 years ago as the world rapidly grew warmer following the last Ice Age. The excess water caused the Mediterranean to overflow into the Black Sea which Ryan and Pitman believe was initially a shallow, land-locked fresh water lake with river-fed fertile plains surrounding it. They suggest that it was a heavily populated area which was completely drowned by the rising sea levels.


Ryan and Pitman suggest that as the ice melted, the Black Sea rose by as much as six inches per day, with water rushing in at 200 times the rate of Niagara Falls. Within a year, 60,000 square miles of land was lost under water, and the fresh water basin became a salt-water extension of the ocean. The farmers and settlers who had relied on the natural environment of the area were forced away, not only by rising water levels, but also by the loss of their fresh water resources. Ryan and Pitman believe the ancient lake shoreline now lies around 5,000 feet below the present water level. Sediment core samples take from the centre of the Black Sea have provided fascinating evidence. Plant roots and mud cracks in these samples suggest a dry riverbed covered in a layer of mud, which indicates a great flood.


As a continuation of Ryan and Pitman’s work, the underwater explorer Robert Ballard decided to study the area in 1999. Ballard was the man who discovered remains of the Titanic and, using highly technological equipment, he and his team found a previous coastline 550 feet deep and 20 miles out into the Black Sea. They took samples which included freshwater and saltwater molluscs from the ancient seabed. Apart from the well-preserved geographical and oceanographic features of the underwater area which pointed to a coastline flooding gradually, the freshwater molluscs species were carbon dated at an age older than the saltwater molluscs. Scientists also discovered that the fresh water molluscs all seemed to die at the same time, suggesting an immediate change in environment for them. The youngest freshwater shells were found to be 7,460 years old, whereas the oldest saltwater creatures dated from 6,820 years ago. This suggests the flood happened somewhere between those two dates, confirming Ryan and Pitman’s original theory.


Ballard returned to the area in September 2000, and discovered some even more fascinating revelations. They found ancient tools and rubbish sites, and crucially, what may be a prehistoric dwelling. The wooden beamed man-made structure contained ceramic vessels and stone tools and was found 300 feet down. The team referred to it as ‘Noah’s House’, although radiocarbon dating has proved it was too young to be from Noah’s time. However, it did provide real evidence that the area was inhabited before the ‘Great Flood’ and would have produced witnesses to the catastrophic event. The condition of the house also showed that the flood had happened at such a speed that surface waves had not had time to batter the building before consuming it.


These theories and discoveries offer many fascinating avenues for further study. Anthropologists are interested to see how population movements are caused by terrible disasters and how ancient races have passed on their great tales using only word of mouth. Geologists and oceanographers are fascinated by immense sea-level changes and flood lands, particularly with the looming threat of global warming. For scholars, historians and the religious alike, the confirmation of an amazing Biblical story is a welcome change in an age of legend destroying scientific discovery.