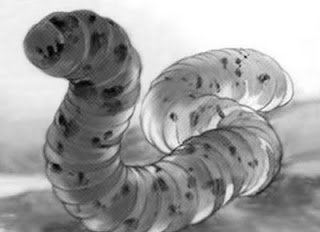 Artist’s impression of a Mongol Deathworm, based on eyewitness reports.


Under the burning sand dunes of the Gobi desert there lurks a creature that is so feared by the Mongolian people they are scared even to speak its name. When they do, they call it the ‘Allghoi khorkhoi’, which means ‘the intestine worm’, because this fat, red, deadly snakelike monster looks similar to a cow’s innards. This giant worm, measuring up to four feet long, can kill people instantly. How it does it, no one knows. Some believe it spits a lethal toxin, others say it emits a massive electrical charge. However it kills, it does so quickly and can do it from a distance. We in the West have come to call this monster the ‘Mongolian Deathworm’.

Mongolian Nomads believe the giant worm covers its prey with an acidic substance that turns everything a corroded yellow colour. Legend says that as the creature begins to attack it raises half its body out of the sand and starts to inflate until it explodes, releasing the lethal poison all over the unfortunate victim. The poison is so venomous that the prey dies instantly.

Because Mongolia had been under Soviet control until 1990, very little was known about the Deathworm in the West. In recent years, investigators have been able to look for evidence of the creature’s existence. Ivan Mackerle, one of the leading Loch Ness Monster detectives, studied the region and interviewed many Mongolian people about the worm. Due to the sheer volume of sightings and strange deaths, he came to the conclusion that the Deathworm was more than just legend. Nobody is entirely sure what the worm actually is. Experts are certain it is not a real worm because the Gobi desert is too hot an area for annelids to survive. Some have suggested it might be a skink, but they have little legs and scaly skin whereas witness accounts specify the worm is limb-less and smooth bodied. The most probable explanation is that it is a type of venomous snake. Although the native Mongolian people are convinced of the Deathworm’s nature, it will take more years of research to satisfy the rest of the world’s scientific community.
Posted by Mitch Williamson at Saturday, October 24, 2009