Maya - Vase of the Seven Gods 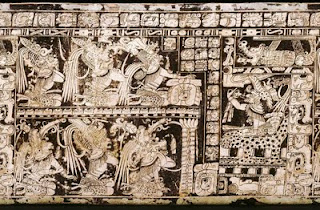 Vase of the Seven Gods, Late Classic Period. This vase illustrates God L (right) presiding over six deities at the creation of the present universe.

The creation episode involving the three cosmic stones is illustrated on the elaborately painted Vase of the Seven Gods. On this vessel, six Underworld gods are shown seated in cross-legged poses. One of the six gods is shown with a defleshed face. The six gods face God L, who occupies a large throne. Covered by a jaguar pelt, the throne of God L can be identified as the Jaguar Throne Stone named in the creation text of Stela C at Quiriguá. God L smokes a cigar and wears the screech owl headdress that is his typical attribute. Although each of the seven gods depicted on the pot wears a distinctive headdress, every god wears the same costume elements on his torso.

Three bundles, a reference to God L’s role as the patron deity of merchants, are included in this scene. Of the three bundles, two are placed in front of God L and are marked with hieroglyphs signifying the phrase Nine-Star- Over-Earth. The third bundle, placed on the Jaguar Throne Stone behind God L is marked with hieroglyphs signifying the word “burden,” a possible reference to the Maya concept that the powers of supernaturals and of rulers alike entailed burdensome responsibilities as well as privileges. The extended hieroglyphic text painted in a vertical format on the vessel body reaffirms the creation theme of the imagery. In addition to recording the creation date 4 Ahaw 8 Kumk’u, the text also utilizes the verb tz’akah, meaning “to bring into existence” and “to put in order.” The verb can be interpreted as a reference to the ordering of the universe. The text also mentions blackness, a quality that is reiterated in the black background of the visual image. Much more than an aesthetic decision on the part of the vessel painter, the background is blackened to represent a sky that has not yet been lifted and an earth that has not yet been lighted.