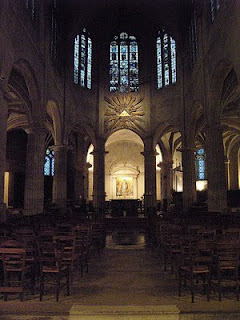 When the Deacon of Paris, François de Paris, died in May 1727, great swathes of mourners attended his funeral. The congregation was sorrowful, for François was only 37, and was said to have holy healing powers. The emotional crowd followed his coffin as it was placed behind the high altar in the small church of Saint- Médard. One by one, the congregation slowly trundled past the body, paying their respects and laying tokens of affection. One crippled boy shuffled up to the coffin with the help of his father. As they looked onto the clergyman’s peaceful face, the boy was suddenly hit by a powerful physical reaction. Members of the crowd struggled to control his squirming body as it was hit by a series of savage convulsions. They pulled him away from the altar and the convulsions stopped. The boy opened his eyes, stood up, and with a look of complete joyous realisation, began dancing and singing around the church, his malformed right leg now taking the weight as easily as his left.


This event was the beginning of an extensive range of miracles that happened over a five-year period and originated at the churchyard of Saint-Médard. What is most remarkable about this series of unexplained incidents is the complete integrity and intelligence of those that witnessed the events. Although many of the Deacon’s followers were poor, unhealthy and perhaps easily fooled, others who observed these bizarre happenings were lawyers, scientists and respected public figures. The most detailed and believable witness accounts came from a magistrate, Louis-Basile Carré de Montgéron. Montgéron had a lawyer friend by the name of Louis Adrien de Paige who had long described the Saint-Médard events, but Montgéron was convinced his friend was being fooled. Despite not particularly wishing to go to the churchyard, Montgéron relented and agreed to visit.


The two men arrived at Saint-Médard on the morning of 7th September 1731. What Montgéron saw immediately shocked him; women writhing on the floor; men beating other women with wooden and metal bars; there was even one woman whose nipples were being twisted in a metal clamp. All the time, the women did not seem to feel pain, in fact they pleaded for more punishment. Paige explained that this treatment cured the women of their deformities and diseases. Things quickly became more disturbing for Montgéron when he saw a teenage girl sitting at a table eating from a plate. As Montgéron approached, he could see that the girl was eating human faeces and drinking human urine. The girl had previously suffered from a psychological problem that caused her to constantly wash her hands. Not only was she cured of this neurosis, but the most amazing part of the episode occurred as she appeared to begin vomiting. Out of her mouth poured pure cow’s milk.

As Montgéron stumbled around the churchyard, he came upon a group of women who were cleaning infected cuts and boils by licking the poisons from them. Montgéron watched as a young child, suffering form the most appallingly diseased leg had her bandages removed. Even the woman who was to perform the cleansing needed to pray for strength. But after a moment she began, removing and swallowing the festering tissue, leaving a perfectly clean leg. During this first visit Montgéron saw enough miracles to leave him emotionally exhausted. He continued to revisit the churchyard many times, collecting enough evidence for an incredible book. That year, he was thrown into prison for handing a copy of the tome to a disgusted King Louis XV. But Montgéron would not be silenced, and published three further books demonstrating an honest, serious examination of the miracles in the churchyard of Saint- Médard.


The French authorities grew concerned that these miracles would undermine their power and the king tried to close the churchyard. At the time, the writer Voltaire quipped: ‘God is forbidden by order of the King to perform any more miracles in the cemetery of Saint-Médard’. When soldiers were sent to seize the church land they failed totally. The stories of Saint-Médard spread and persisted for years, and the Scottish philosopher, David Hume wrote that there was never ‘so great a number of miracles ascribed to one person’, as those attributed to François de Paris. It is a truly enduring mystery.