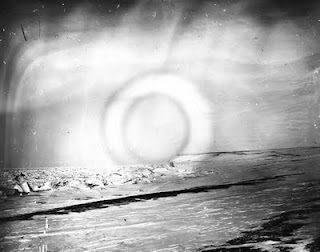 Earth lights dance above a Norwegian fjord. These are probably similar to the Northern Lights in origin.

Throughout history, people have noted strange lighting phenomena emanating from remote areas of natural land. ‘Will-o’-the-wisps’ are well known occurrences featuring small flames that spark from marsh and woodland. Ball lightning is a curious form of meteorological phenomenon where air pressure causes an electrical charge in the form of a ball. But the most fascinating natural lights are even more bizarre. People across the world have reported seeing strange orbs of light that seem to ignore the standard laws of physics – explanations for their appearance are anything but definite. Present theories range from alien spacecraft to pan-dimensional energy. All we do know is that they seem to appear from the ground, and so they have been termed Earth Lights.

These odd glowing visions have been witnessed radiating all manner of colours, from bright white, to blue, red or even black. They can be as small as a tennis ball, or as large as a car, and although they are normally spherical, witnesses have seen Earth Lights of many designs. Accounts of glowing tadpole shapes are particularly common. People who have managed to view them close-up report odd internal reactions, and bizarre crackling noises. The lights move in erratic directions, and can split into formations of multiple floating orbs. They seem to have a strong connection to geological and geographical features, and linger around lakes, mountains and rocky ridges.

One of the most impressive series of sightings happened in Hessdalen, Norway, in the early 1980s. People living in the area began to see strange lights emerging from the valley in November 1981. The glowing designs ranged from bullet shapes to triangles, and were commonly white and yellow in colour. The level of reports reached such a pitch that two airforce officers were sent by the Norwegian government to examine the occurrences. By the start of 1984, Swedish and Norwegian UFO enthusiasts had begun Project Hessdalen, a month long scientific study of the valley. This yielded some readings of Earth Light properties and also managed to capture examples of the Earth Light phenomenon on film.

Although the 1960s saw the creation of theories that connected these unexplained light displays with earthquakes and fault lines, in-depth study of the subject had always been overshadowed by alien and UFO interest. However, unlike UFOs, the verifiable scientific relationship between these lights and the earth has allowed the phenomenon to be quietly, but seriously, studied. The leading name in this field is Paul Devereux, the man who actually coined the term ‘Earth Lights’. Devereux has travelled the world studying versions of the phenomenon, separating fake or mistaken incidents from genuine Earth Lights. His conclusion is that they are an honest and real phenomenon.

Devereux, along with much of the interested scientific community, believes the lights may be connected with the strains and conflicting energy found in the Earth’s crust. Just as heavy pressure in the atmosphere causes storms and lightning, so too pressure under the surface causes equally impressive reactions. As the tectonic plates rise and fall, it is suggested that energy is released through particular areas of weakness such as fault lines, or areas of high mineral or rock density. It has been discovered that many historical accounts of strange lights appeared on recently discovered fault lines, or just before earthquakes developed.

Different theories suggest the lights could be alien landing craft; some alien abduction victims have reported seeing similar glowing features. Other people believe they have amazing paranormal qualities, and link our world with another dimension. Some witnesses claim to have heard ghostly voices and seen apparitions after an Earth Light display. In both these cases the effect of magnetic variation on brain patterns has been cited as having an influence. Many experts believe the extreme magnetic upheaval caused by conflicting tectonic forces needed in Earth Light creation may cause the brain to suffer hallucinations.

The effect on witnesses, although not dangerous, can be striking. One of the most common areas for Earth Light incidents in Britain is the Longendale Valley in the Peak District. Sean Wood is a local resident who has seen the lights over thirty times in sixteen years. As a catalogue of his sightings he now produces paintings of the local landscapes. In all his pictures, in the corner of a field or the side of a valley, there lurks the image of a small glowing orb. For him, the phenomenon of Earth Lights is an unexplainable, but acceptable, natural occurrence.