World's oldest map: Spanish cave has landscape from 14,000 years ago 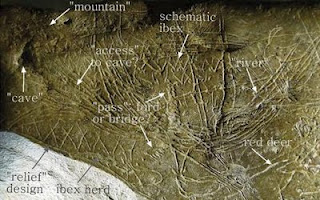 Archaeologists have discovered what they believe is man's earliest map, dating from almost 14,000 years ago.

By Fiona Govan in Madrid


Archaeologists have discovered what they believe is man's earliest map, dating from almost 14,000 years ago Photo: EPA
A stone tablet found in a cave in Abauntz in the Navarra region of northern Spain is believed to contain the earliest known representation of a landscape.

Engravings on the stone, which measures less than seven inches by five inches, and is less than an inch thick, appear to depict mountains, meandering rivers and areas of good foraging and hunting.

"We can say with certainty that it is a sketch, a map of the surrounding area," said Pilar Utrilla, who led the research team.
A team from the University of Zaragoza spent 15 years deciphering the etched lines and squiggles after unearthing the artefact during excavation of the cave in 1993.

"Whoever made it sought to capture in stone the flow of the watercourses, the mountains outside the cave and the animals found in the area."

"The landscape depicted corresponds exactly to the surrounding geography," she said. "Complete with herds of ibex marked on one of the mountains visible from the cave itself."

The research, which is published in the latest edition of the Journal of Human Evolution, furthers understanding of early modern human capacities of spatial awareness, planning and organised hunting.

"We can't be sure what was intended in the making of the tablet but it was clearly important to those who populated the cave 13,660 years ago," said Ms Utrilla. "Maybe it was to record areas rich in mushrooms, birds' eggs, or flint used for making tools."

The researchers believe it may also have been used as a storytelling device or to plan a hunting expedition.

"Nothing like this has been discovered elsewhere in western Europe," she said.