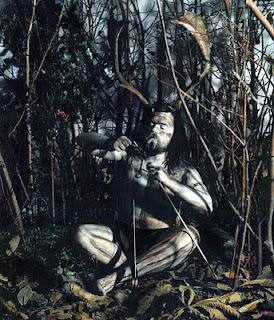 British folkloric figure. In The Merry Wives of Windsor, Shakespeare speaks of Herne as a hunter who hanged himself from an oak tree and was thereafter forced to haunt the woods where he died. Herne the Hunter appears in various legends as a horned spirit, suggesting that he may have originated as a woodland deity like CERNUNNOS. One tale from Windsor Forest describes Herne in language typical of FAIRIES, for he was said to shoot his victims with invisible darts if they intruded upon magical places.

(Gwyn ap Nudd, Herne, Herne the Hunter, Gabriel) Welsh hero. The Welsh king of FAIRYLAND, “White One, son of the Dark,” was said to reside under GLASTONBURY TOR, the small pyramidal hill that is southwestern England’s most significant feature. Gwynn reigned over the folk called the TYLWYTH TEG, beautiful tiny people who wore blue and danced all night in the fashion of Irish FAIRIES. His special feast was spring’s beginning, BELTANE, when he led the WILD HUNT to raid the land of the living. His name means Gwynn, son of Nudd; his father was king of a Hades-like Otherworld called ANNWN. He could materialize at will, surrounded by his beautiful host playing FAIRY MUSIC. His queen was the daughter of LLUDD, CREIDDYLAD, on whom Shakespeare based the character of Cordelia in King Lear.

Alternative names used of Gwyn ap Nudd are Herne the Hunter, the frightening figure who skulks around Windsor Forest in England; and Gabriel, known best for his vicious fairy hounds.