THE PYRAMID OF MOUNT TAYGETUS 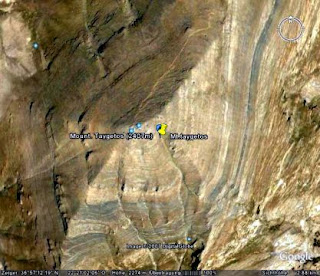 Mt.Taygetos is the highest peak in southern Greece with 2.407m. Old legend tell that it was the 1st pyramid ever built on earth. There is a big question mark over whether this rock structure is manmade or a natural occurrence. Visitors have described how the texture of the rock surface suddenly becomes smooth, relative to that below, where the pyramid shape begins. 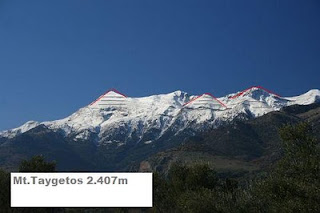 The highest peak of the mountain has the shape of a pyramid. Some researchers are convinced that this structure, found on one of the peaks of mount Taygetus, was carved by the hand of man, in remote antiquity, to form this pyramid shape. Others, however, believe that this is nothing but a natural rock formation. No erosion mechanism has been suggested (to date) which could create this shape naturally. Particularly curious are the strange shadows cast at dawn and sunset. It is said that in ancient years, Spartans built a temple of Apollo at the peak. A church of the prophet Elias can be found at the same place.
Posted by Mitch Williamson at Tuesday, April 13, 2010