Neanderthals wouldn't have eaten their sprouts either 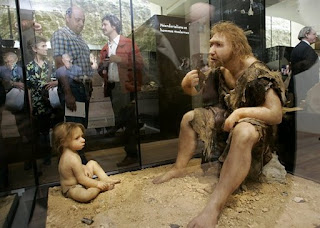 "This indicates that variation in bitter taste perception predates the divergence of the lineages leading to Neanderthals and modern humans," they said.

Substances similar to PTC give a bitter taste to green vegetables such as Brussels sprouts, broccoli and cabbage as well as some fruits.

But they are also present in some poisonous plants, so having a distaste for it makes evolutionary sense.
"The sense of bitter taste protects us from ingesting toxic substances," the report said.

What intrigued the researchers most is that Neanderthals also possessed a recessive variant of the TAS2R38 gene which made some of them unable to taste PTC -- an inability they share with around one third of modern humans.

"This feature ... is a mystery of evolution," said the report.

"These (bitter) compounds can be toxic if ingested in large quantities and it is therefore difficult to understand the evolutionary existence of individuals who cannot detect them."

The report's lead author, Carles Lalueza Fox of the University of Barcelona, speculated that such people may be "able to detect some other compound not yet identified."

This would have given them some genetic advantage and explain the reason for the continuation of the variant gene.

Neanderthals and modern humans shared a common ancestor from which they diverged about 300,000 years ago.

Excavations since 2000 at the site at El Sidron, in the Asturias region, have so far recovered the skeletal remains of at least 10 Neanderthal individuals.

The squat, low-browed Neanderthals lived in parts of Europe, Central Asia and the Middle East for around 170,000 years but traces of them disappear some 28,000 years ago, their last known refuge being Gibraltar.

Why they died out is a matter of furious debate because they existed alongside modern man.

The CSIS research was published in the British Royal Society's Biology Letters.
Posted by Mitch Williamson at Tuesday, April 13, 2010