The rat that's the size of a cat: BBC team discovers 40 new species in 'lost world' 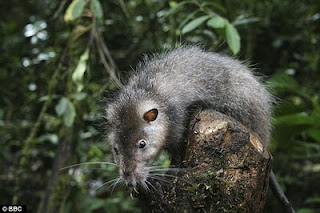 No fear: The rat is not afraid of humans, which could make it vulnerable 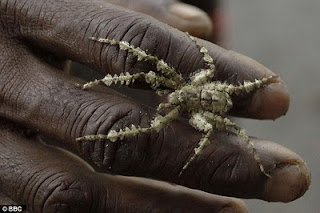 A bizarre jungle spider camouflaged as lichen
Rats as big as cats, fanged frogs and grunting fish - they sound like something from a horror movie.

But, incredibly, there is a 'lost world' on a distant island where these nightmarish creatures really exist.
A team of scientists discovered the bizarre animals - and dozens of others - at a remote volcano in Papua New Guinea.

In the kilometre-deep crater of Mount Bosavi, they found a habitat teeming with life which has evolved in isolation since the volcano last erupted 200,000 years ago.

Among the new species was the the Bosavi Woolly Rat.

One of the biggest rats in the world, it measures just over 32 inches from nose to tail and weighs 3lb.
The silvery grey mammal has dense fur and its teeth suggest it has a largely vegetarian diet and probably builds nests in tree hollows or underground.

Mr Buchanan and Smithsonian biologist Dr Kristofer Helgen were first on the scene when the rat was found by a tracker from the local Kasua tribe. Dr Helgen said:

'This is one of the world's largest rats. It is a true rat, related to the same kind you find in the city sewers, but a heck of a lot bigger.