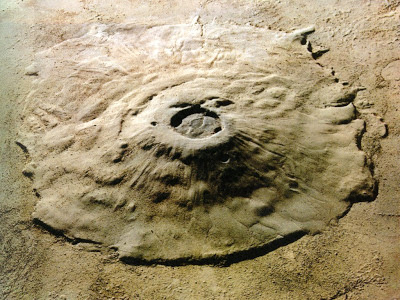 The Martian volcano Olympus Mons is one of the largest in the solar system. The volcano is more than 360 miles (600 km) across and 16 miles (27 km) high. (Courtesy of NASA)

Olympus Mons volcano, Mars The largest-known shield volcano in the solar system, Mars's Olympus Mons stands some 75,000 feet (22,860 m) high. Olympus Mons is one of several large volcanoes in the Tharsis region of the northern hemisphere. The Martian volcanoes appear to have played a major role in shaping the topography of that hemisphere in relatively recent times, although the existence of older volcanoes elsewhere on Mars indicates that volcanism has been active on Mars for much of the planet history. The major Martian volcanoes are larger by far than any on Earth. The evident absence of plate tectonics on Mars may account for the impressive size of its volcanoes. Unlike Earth, where horizontal motion of crustal plates can prevent a volcano from growing past a certain height because the volcano can move out from its source, Mars appears to have a fixed, comparatively immobile crust. This lack of movement gives a volcano time to reach tremendous size by terrestrial standards. Because the processes that create volcanoes along crustal plate margins on Earth are apparently lacking on Mars, it is believed that radionuclides underground may supply the heat required for volcanism there.
#
Although little is known about the geology of Mars compared to that of Earth, volcanism is known to have played a large part in shaping the surface of the red planet. Unmanned probes to Mars have revealed the existence of large volcanoes, such as Olympus Mons and the volcanoes along nearby Tharsis Ridge in the northern hemisphere. Olympus Mons is the largest volcano in the solar system to the best of our knowledge. Although volcanic mountains are evident on its surface, Mars appears to lack the pattern of shifting and colliding crustal plates that characterizes tectonic and volcanic activity on Earth. It has been suggested that material expelled through the volcanoes of Tharsis Ridge came from magma underlying Valles Marinensis, a great valley thought to have been formed by subsidence as molten material underground was removed through eruptions. Volcanism evidently has given the northern hemisphere a geomorphology differing from that of the southern hemisphere in ways besides the mere existence of volcanic mountains. Impact cratering is much more visible in the southern hemisphere, whereas in the northern hemisphere, tephra from eruptions apparently has covered many impact craters and other such features. The Martian volcanoes affect the planet's meteorology on a small but interesting scale; clouds form in the lee of Olympus Mons and are thought to have been observed through telescopes on Earth at various times before probes reached Mars. Mars, like the moon, appears to be much quieter than Earth from a seismic viewpoint. Evidence of erosive activity on the Martian surface indicates that Mars once possessed substantial amounts of liquid water and a denser atmosphere than at present. Although the Martian atmosphere is only a fraction as dense as that of Earth, occasional dust storms on Mars are capable of transporting large quantities of sediment aerially. These storms are capable of hiding even the giant Martian volcanoes from view.

shield volcano
A volcano that is shaped like an ancient shield. It is a relatively flat mound with gradual slopes, formed by eruptions of basaltic lava. The basalt has such low viscosity and lacking in ejecta that it cannot stack up a steep slope. Olympus Mons on Mars and the Hawaiian Islands are examples of shield volcanoes.