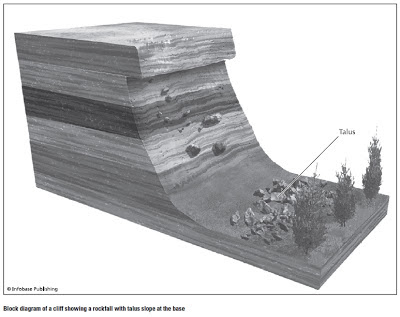 rockfall
In contrast to a rockslide, which stays in contact with the surface throughout its movement, a rockfall is a mass of rocks that breaks loose from the bedrock and falls through the air to the slope below. Most of the travel is a free fall, but it may include bouncing as well. Rockfalls typically break away from the bedrock along steeply inclined joints. Undercutting of slopes by rivers, wind, or human activities also hastens rockfalls. Toppling is a particular type of rockfall that involves the rotation of the rock mass away from the exposure around a fixed fulcrum. Whatever the mechanism, repeated rockfalls or rockslides produce a pile of rock rubble at the foot of a cliff or slope. This rubble is called talus. Earthquakes in mountainous regions produce numerous rockfalls. 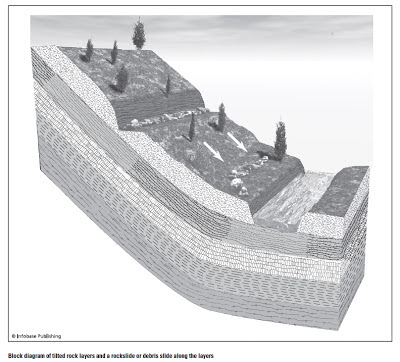 rockslide
A mass of solid rock that slides quickly down an inclined discontinuity. The most common discontinuities are bedding and fractures. In sedimentary rocks, bedding is usually the primary discontinuity. With bedding, a rigid layer such as limestone or sandstone typically breaks free and slides down an underlying, softer layer such as shale. In crystalline rocks (igneous and metamorphic), the most common discontinuities are joints and faults. The rock masses may break loose along steeply inclined joints through frost-wedging processes, but they slide along shallower joints and faults. Rockslides may be generated by a number of processes, but they are especially common during earthquakes. The surface waves shake loose otherwise stable rock masses, and they slide into the valleys below with disastrous results.
Posted by Mitch Williamson at Thursday, January 31, 2013