Fionn MacCumhail, the leader of the Fianna. 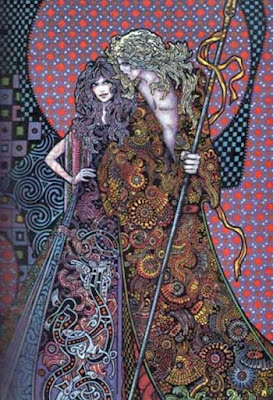 Fionn appears in another legend called The Pursuit of Diarmuid and Gráinne . In this story, however, Fionn is not its protagonist, but its antagonist. In this tale, Gráinne, the most beautiful woman in Ireland, and the daughter of Cormac MacAirt, the High King of Ireland, was betrothed to the aging Fionn.

However, the princess fell in love with Diarmuid, one of the Fianna, when she first saw him. During the wedding feast, Gráinne drugged the entire party, with the exception of Diarmuid, and confessed her love for him. Diarmuid, however, was loyal to his leader, and did not reciprocate her love. Gráinne then put a spell on Diarmuid to make him fall in love with her and the pair ran away. When Fionn realized what had happened, he pursued the pair all over Ireland.

In one version of the legend, Diarmuid and Gráinne came across the heath of Ben Bulben, where the pair was confronted by a giant boar, the only creature that could harm Diarmuid. The warrior fought with the beast to protect Gráinne, and though he managed to kill it, was mortally wounded by it as well.

In another version of the legend, Fionn gave up the chase eventually, and allowed the pair to settle down. Years later, Fionn invited Diarmuid to a boar hunt at Ben Bulben, where the warrior was fatally wounded by a boar. The only way that Diarmuid could be saved was for him to drink water from Fionn’s cupped hands. Although the Fianna begged Fionn to save Diarmuid, he refused to do so, and only changed his mind when his son, Oisin, threatened to fight him. By then, however, Diarmuid had died.